As they say, a photo is worth a thousand words. Whether you like it or not, photos are important – especially your professional profile photo. These photos can make powerful impressions on current and future employers and employees.

Analysing 2,000 profile photos on Linkedin, JDP assigned a grade to the photos of 11 industries. The good news is – the photos of HR and recruiting professionals earned the industry a decent A- grade overall. But the same folks were also called out for the epic fail of having the most photos that don’t fill the frame.

On a whole, real estate professionals had the best photos, earning the industry the only A grade awarded. This was followed by HR and recruiting professionals, as well as marketing, advertising and PR professionals, with both industries receiving an A- grade.

On the flip side, the healthcare, education, government, and retail industries found themselves at the bottom of the table, earning a D, D-, and two F grades respectively. 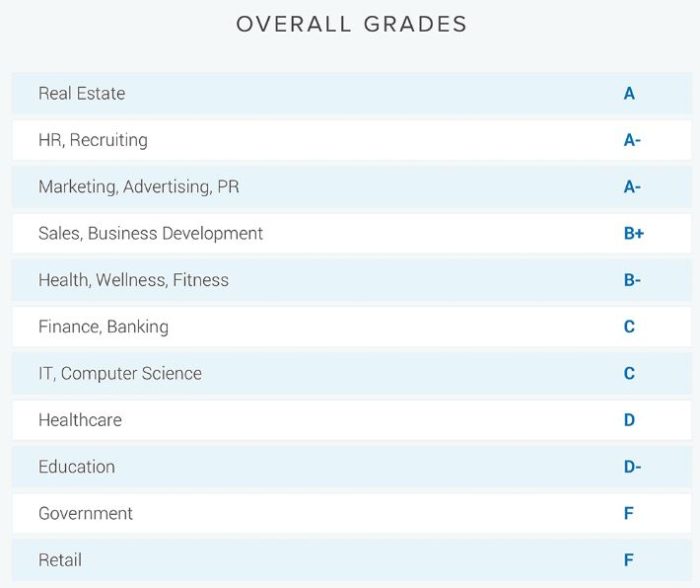 Among the photos analysed, 76% had full smiles, 12% tight-lipped smiles, and the remaining 12% no smile.

The professionals who showed full smiles were mainly from the health, wellness, and fitness industry; the HR and recruiting industry, and the healthcare industry.

By gender, the ladies exhibited the most full smiles, while tight-lipped smiles and no smiles were more often observed in the men.

In terms of attire, it seems that business casual is the way to go. 42% of photos include professionals in business casual attire. Other styles are split between social (26%) and formal (24%) attire. While 8% felt it was okay to dress casually.

Perhaps unsurprisingly, the most formal dressers came from the fields of finance and banking; real estate; and government. While the most casual were from health, wellness, and fitness industry; retail industry; and the government.

Where do HR and recruiting professionals stand? According to JDP’s analysis, they went with the 42% who donned business casual attire.

Women more often wore social attire, while men preferred formal attire. But when it comes to business casual or casual, there wasn’t a distinct difference between genders.

Of course, there were the epic fails – classified as car selfies, photos of printed photos, and photos that don’t fill the frames.

The industries that were guilty of these include:

The cheat sheet to creating a digital workplace

Prime Minister of Singapore Lee Hsien Loong has agreed to a 36% annual pay cut, but will still be receiving the highest salary of ..

Leadership advice for the week: Not always reaching your potential is okay, but overthinking it is a problem, finds research by Ne..

‘Absolutely no increase’ in number of women directors in Hong Kong

In fact, 7 local firms on the Hang Seng Index have no female directors at all. How's that for celebrating International Women's Da..

A day in the life of: Sameet Kaur Sidhu, Experian

She takes us through a typical Monday, which starts and ends with her two young sons, and lots of role models along the way...