Firms are paying more attention to soft skills and personality types because they now recognise how important those factors are, and because the technology has evolved to offer a way to test for them at it.

That was one of the key findings from Universum’s third installment of the 2020 Outlook series, which polled more than 2000 senior executives across 18 countries.

The report highlighted organisations are prioritising things like “personality” and “cultural fit” when hiring candidates – both of which were cited more often than degrees or grades.

Work experience remained the top qualification – 58% listed it as a top factor when recruiting candidates for executive/office positions five years from now.

Close behind it was personality profile, chosen by nearly half of the respondents (48%).

ALSO READ:
3 ways to get the perfect work personality

“In the last five years, incredible advances in technology have allowed C-level executives, talent managers and HR to build more nuanced profiles of prospective candidates and current employees than ever before,” the report stated.

“Nowadays, short, inexpensive surveys can assess qualities like creativity, patience, persistence and problem-solving. Some companies even use online games to test skills and fit.” 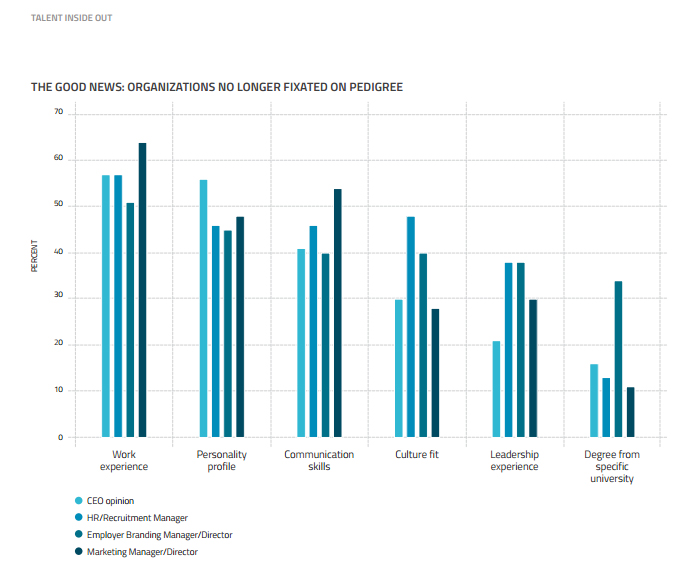 Cultural fit was also an important factor for many, with 39% of overall respondents saying it was an important qualification.

Interestingly, the report found a lack of consensus about how much it matters.

Less than one third (30%) of CEOs thought cultural fit was important, even though 48% of HR leaders viewed it as a significant trait in candidates.

This was followed by 40% of employer branding professionals, and 28% of marketing staff.

Respondents polled also explained how commonly they practice persona-based recruiting – which constituted hiring someone based on both their both quantifiable factors (such as area of study, mastery of technical skills or years of experience) as well as qualitative factors (such as motivation and aspirations)

Overall, 44% said they use personas currently during recruitment, and 69% will do so in the future.

The 25 best companies for interns

"Nowhere else within their businesses would such a lack of management information be acceptable."..

How to design your organisation around core competencies

Colin Beames recommends the three layered pyramid for an integrated approach to intelligent investment in people and resources...

Up the ranks: Susan Chen joins Viva Generik as CHRO

Based in Jakarta, Susan Chen will be responsible for building and leading internal HR, leadership and cultural transformations...

He takes over from M. Kulasegaran, and will oversee the country's industrial relations, labour matters, skills development and oth..

Is the commute to work burning your employees out?

If your staffer spends more than 35 minutes getting to the workplace, expect an increase in their stress and cynicism levels...

8 ways to deal with difficult employees

8 ways to deal with difficult employees