The credibility of CEOs have increased by 7% this year to 44%, according to the 2018 Edelman Trust Barometer, with 64% of survey respondents indicating that CEOs should take the lead on change rather than wait for the government to impose it. The report surveyed more than 33,000 individuals across 28 countries, including Singapore, Malaysia, Indonesia and Hong Kong, between 28 October to 20 November 2017.

This was an improvement from last year, where CEO credibility dropped to an all-time low of 37%, a 12% difference compared to 2016. The decline was seen across 28 countries, with 23 countries deeming CEOs as not credible sources. 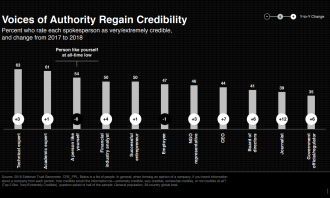 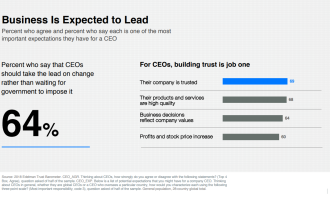 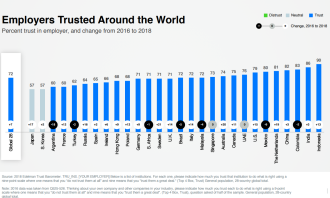 Employees in Hong Kong were ranked slightly lower than the global average (68%) when it came to their trust in the company, even though the sentiment went up by 9%. Employee trust towards the company remains neutral (57%) in Japan and South Korea.

When it comes to trust in CEOs, Lars Voedisch, principal consultant and managing director of PRecious Communications is of the view that they are held to higher standards nowadays, especially as they are increasingly seen as public figures. This comes at a time when consumers are expecting more from brands than just offering great products or services. He said:

CEOs are expected to have an opinion on topics beyond just touching their direct business interests.

He added that CEOs are also expected to drive what they believe is right and own up to the role model that they are expected to be. “And at the very core of these expectations are business leaders’ personal behaviour and shared opinions, holding CEOs accountable to higher ethical standards,” Voedisch said.

Meanwhile, Bob Grove, COO of Edelman, APACMEA, said CEOs are expected to operate with the company’s values at their core, in addition to building trust in their companies and ensuring their businesses offer high quality products and services to provide value.

He added that majority of respondents believe companies purely focused on profits are bound to fail and by implication, are not trust. Grove said:

CEOs must adopt a social purpose mindset and show their commitment to the well-being of markets they operate in.

The story was first reported by Marketing-interactive.com.

Salary and hiring trends for Singapore in 2018

Singaporeans to receive $500 credit to upgrade themselves

WDA also unveils various other initiatives under the SkillsFuture movement to foster a culture of lifelong learning amongst locals..

Carrie Lam: Love can kill off the disease and Hong Kong can ‘rise from the ashes’

Lam said the government's measure to contain the virus has been based on three principles: Agility, readiness, and transparency...

20% of Singaporeans lie to get time off work

Some of us seem to have no problem lying to our bosses to get a day or two away from the office. ..