Are your staff as healthy as they think?

With more organisations rolling out health and well being programmes, today’s staff might be inclined to think they are getting healthier – but are they really as healthy as they think?

According to Prudential Singapore’s Health Literacy Poll, while more than 70% of Singaporeans think they are healthy, many are not eating enough greens and fruits nor getting enough exercise.

In terms of eating healthily, while 60% of the 501 respondents perceived their diets to be generally healthy, close to half of them (46%) eat less than two servings of vegetables a day, the recommended portion by Singapore’s Health Promotion Board. At the same time, about three in five also consume less than the prescribed two servings of fruits a day and almost two-thirds opt for less sugar only ‘sometimes’, ‘seldom’ or ‘never at all’.

On the bright side, only 2% of males and 3% of females drink past the alcohol limit, while just 1% consumes more than the recommended limit of four to five cups of coffee/tea a day. This is despite the fact that the majority of Singaporeans are ignorant about the recommended level of alcohol (95%) and coffee/tea consumption (97%). 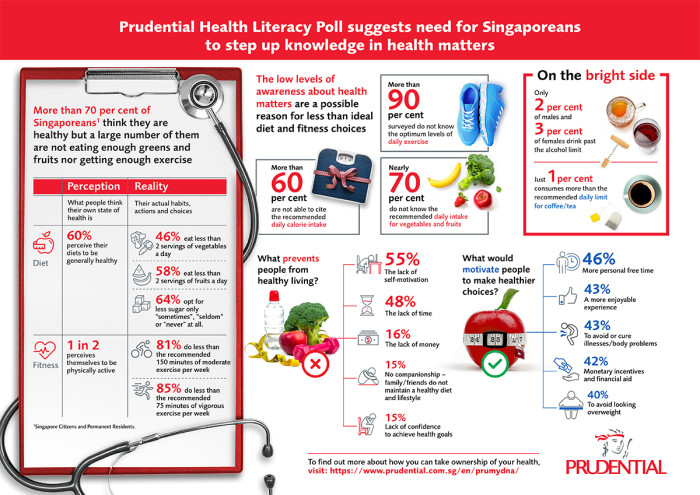 READ MORE: Are your employees facing health problems due to obesity?

The survey pointed out that one of the reasons for Singaporeans’ less than ideal diet and fitness choices is the low level of awareness among Singaporeans about what constitutes healthy living.

Apart from the knowledge gap, the top barriers that keep people from maintaining a healthy diet and fitness regime were a lack of self-motivation (55%) and time (48%).

As for what would motivate Singaporeans to commit to healthier choices, unsurprisingly, having more personal free time (46%) was ranked as the top motivator. This was followed by having a more enjoyable experience of exercising and eating healthily (43%), and receiving monetary incentives and financial aid (42%). More than two in five (43%) also said that the prevention of negative outcomes such as illness or obesity would also drive them to make better choices.

34% of Gen Z feel they lack the confidence to lead

That said, more than 60% of Gen Z feel becoming a leader during their career is important...

Following his Medal of Honour awarded by NTUC, he urges companies to adopt bold and disruptive changes to transform industries. ..

Going behind the scenes of a recruitment drive

Managing a recruitment drive is more than filling roles with required skill sets, writes Catherine Ang, HR director at The South B..

In the US, 52% of jurisdictions allow businesses to terminate employment contracts in less than a day. In APAC this figure is just..

The march for 17 days of statutory holidays for over 850,000 locals from firms such as Hong Kong Disneyland will be held on Friday..