35% of hiring decision makers expect more employees to quit over the next 12 months, according to new data by global recruiting site Glassdoor. The survey was conducted amongst 750 hiring decision-makers in the U.SA and the UK found almost half (45%) saying salary was the main reason for employees to change jobs, followed by career advancement opportunities, benefits and location.

Two thirds (64%) of those that took part in the survey said that they think their company is satisfactory/very satisfactory at clearly setting pay and benefit expectations within job postings. Yet according to Glassdoor salary ranges still remain unclear for most jobs, with less than one in 10 online job listings include information about salaries in the job description.

Hiring decision-makers report that the top influences on whether a candidate joins their organisation includes: 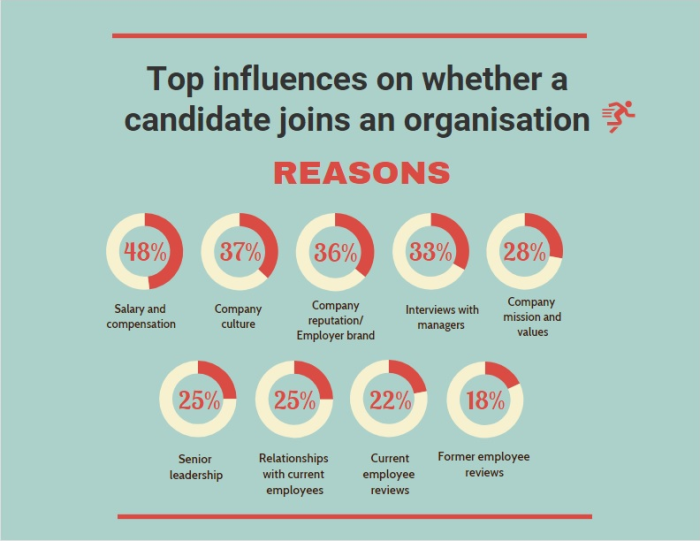 Over a third (37%) of hiring managers also said retention rates would increase significantly if new hires were better informed during the hiring process about details of the job.

While almost half (48%) noted that salary and compensation is the most influential factor for a candidate’s decision on where to work. Pay offers from rival firms are a significant consideration for employers – two-thirds noted competing offers were a major challenge in attracting and hiring informed candidates.

“Pay can be a big motivator for employees to take a job, however, very few job listings actually include pay information, even if this is overwhelmingly what job seekers want. If candidates were better informed about how their pay and career could progress during the initial job search and recruiting process, they would be less likely to take a job that turns out to be a bad fit,” said Carmel Galvin, chief human resources officer at Glassdoor in a press release.“Recruiters and hiring managers need to manage expectations and use all channels available to them to communicate with potential candidates to ensure pay realities meet expectations. It shouldn’t be a battle for job seekers to gain insights into salaries, benefits, culture and what their career path might look like in a job.”

Some of the ways in which organisations are forging gender equality at the workplace include flexible work solutions...

Stay tuned for the latest updates on HR and manpower issues arising from the speech...

At the HeForShe Impact Awards attended by Human Resources, three individuals and one multinational firm walked away with awards...

Sabrina Zolkifi learnt the hard way working by the beach can be a bit tricky if you lack discipline...

Who is really responsible for recruitment?

Could the answer lie outside the HR function? Sabrina Zolkifi mulls over the idea that talent acquisition should be a stand-alone ..