The guide to employing Malaysian Millennials

Bank Negara Malaysia holds onto its top spot as the most ideal employer for business graduates in Malaysia, while for their engineering counterparts, PETRONAS remains as their most desirable employer, according to the Malaysia Top 100 IDEAL Employers student survey released by Universum.

Collating responses from 15,883 graduates from 27 different universities, the survey seeks to unmask the career goals as well as employer preferences in Malaysia.

In an exclusive statement to Human Resources, Dato’ Raiha Azni A Rahman, senior vice president for group human resource management of PETRONAS shared that the company upholds its EVP – namely trust, grow and reward – to attract, motivate and retain talents in driving continued success. “PETRONAS adopts diversity and inclusivity in its people policies and practices, in line with the needs of today’s workforce,” she added.

ALSO READ: What you need to know about hiring Singaporean graduates

For more than half of the Malaysian young talent (55% business students and 56% engineering students), the most important career goal upon graduation is obtaining work-life balance. Coming in second is the ability for graduates to maintain the stability of their job.

In fact, achieving career security could become the most important career goal among young local talent, ahead of even work-life balance, especially since a total of 31,476 employees in Malaysia were laid off between January and September 2016, the study revealed.

Most interesting, unlike their Singaporean counterparts who chose leadership as their third most important priority, close to three in 10 Malaysian graduates (34% business students, 29% engineering students) aspire to have an international career. 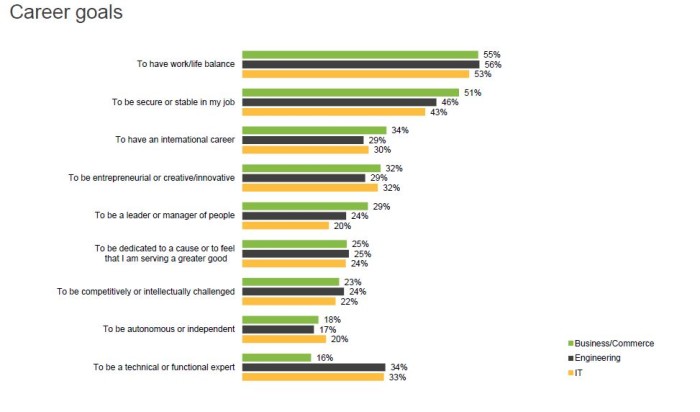 Joakim Strom, CEO APAC, Universum said: “Attracting essential talent is getting increasingly difficult in Malaysia, much like other key regional markets. Companies still need to do more, they need to understand how to communicate with talent, what top talent expects from them, and to understand and control their employer brand.”

ALSO READ: Top 10 companies Malaysians are most attracted to work for

The report also finds that potential employees in Malaysia focus more on the people and culture of a future employer than the strength of their reputation. Unanimous among the business and engineering cohorts, having a friendly work environment is still the most important criteria when searching for a future employer.

The second most important factor in the search for a prospective employer are those who are perceived to offer strong professional training and development. For engineering students, their third most highly sought after priority is having a good route to high future earnings, while for business students, they want to work with leaders who are supportive of their development. 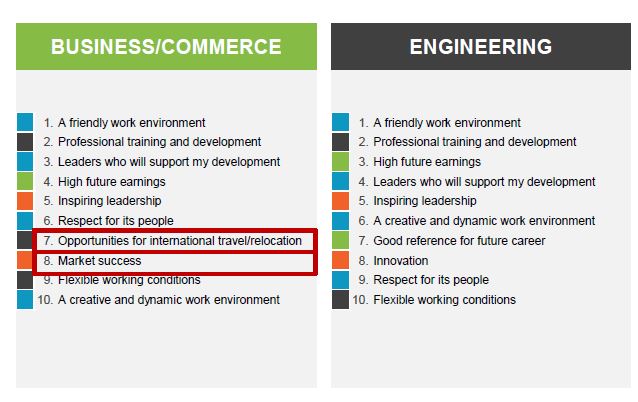 For employers who are struggling to attract or retain the talent, Universum zooms in to the two major concerns of Malaysian graduates:

Commenting on this, Ryan Pua, country manager, Malaysia for Universum said: “The drop in salary expectations isn’t suprising. Many graduates in Malaysia aren’t well placed to enter into the jobs they dreamed about straight after university. There is still a skills shortage at this level, and it’s the responsibility of all stakeholders to improve the situation, which means employers and the government, as well as the univeristies and the talent themselves.” 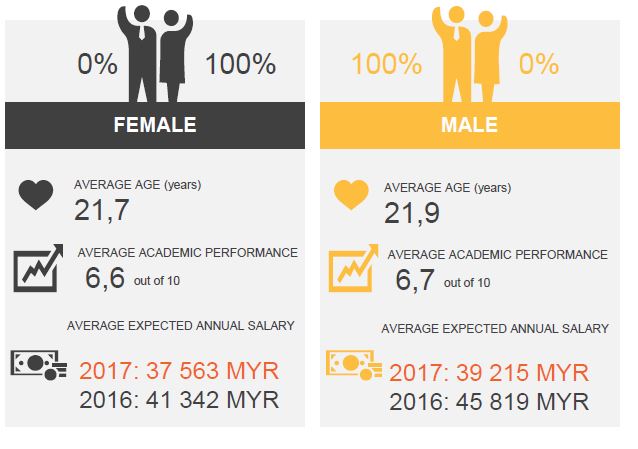 Students hailing from private and public universities differ in their employer preferences. Business students from private universities are significantly more attracted to employers who they perceive to offer a clearer path for advancement, and interaction with international colleagues. Whereas their public university peers are much more attracted to employers who exercise corporate social responsibility (CSR), sponsorship of future education, and offer more team orientated work.

In the case of engineering students, the public university cohort seeks an employer who will sponsor future education and offer more team work, while CSR is not an important priority. Instead they value higher levels of personal responsibility. The private university cohort, on the other hand, seek employers offering a clear path for advancement, job security and being able to integrate personal interests into their career.

The top 10 ideal employers among business and engineering are as follows:

Meanwhile, this year’s Forbes Global 2000 list saw 14 Malaysian companies making the cut and sharing the spotlight with some of the biggest, most powerful and valuable firms in the world.

Here are the Malaysian companies that made it into the list of top 1,000:

The lesser of two evils: bad bosses vs. bad colleagues

The dos and don’ts of bringing home-made lunch

Five handy tips for a healthier workforce during turbulent times..

As Lunar New Year 2016 approaches, we reveal the 'monkey' business each Chinese zodiac sign is set to be up to this year...

An INSEAD study has found that the death of a company director triggers the CEO's awareness of their own mortality. ..

Pressure for talent across the region's developed and developing economies is made clear with this new research. Find out how Sing..