Apple’s HR chief Denise Young Smith has responded to allegations of sexism in the workplace. She says the company takes them very seriously, but any disciplinary actions remain confidential.

Last week, a series of emails was published by Mic in which female Apple employees discussed the tech giant’s working environment. One anonymous employee described the atmosphere in her office as “very toxic” due to jokes about sexual assault.

Apple has not formally confirmed or denied the allegations, but on Friday, HR chief Denise Young Smith sat down with Recode to discuss them.

“We take these things not just seriously, but personally,” she said. “I have been grieved over this … that someone may have had this kind of an experience.”

Although she added that the alleged incidents of sexism are not reflective of her own experiences at the company, she acknowledged that employees at the company do sometimes “fall short”.

“Fall short” might not be quite how the anonymous employee would have described her experience of a workplace where she no longer feels safe. “Rape jokes in work chat is basically where I completely draw the limit”, she wrote to Apple CEO Tim Cook in an email obtained by Mic. She continued that she did not feel safe at a company that tolerates employees who make such jokes.

According to the full email, published by Gizmodo, the female employee had previously tried to notify her manager of the toxic culture she was experiencing on her team of over 30 people, in which she is the only woman, but without success.

Reportedly, the email is only one example out of 50 pages of emails the website obtained from both current and former Apple employees.

Young Smith realises the impact the allegations can have on the company, whether confirmed or not. “The unfortunate consequence of this is that we may have lost the trust of others”, she told Recode.

Although arguably some trust could be regained by publicly taking action against the employees involved, the HR leader declined to say what had been done in response to the cases, stating that these matters are kept confidential for privacy reasons.

Speaking about the challenge of creating a diverse working environment, Young Smith questions whether top-down corporate lectures or a huge dedicated diversity team are the answers. Instead, she wants all of Apple’s 140,000 team members to feel its their personal responsibility to make Apple more inclusive.

André Czanik will be bringing with him close to 20 years' worth of regional and local experience in the health consulting and insu..

The MoU will help nurture the next gen of talent by giving students access to live systems to experiment and operate in real-time...

Your staff would quit for a job with better technology

A quarter of employees would consider taking a new position if it provided technology that allowed them to be more productive... 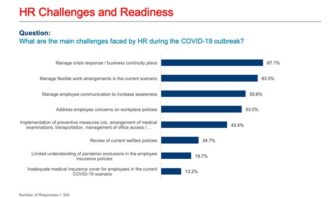