Bank Negara Malaysia (BNM) has released its Annual Report 2016 yesterday, noting that “ the global youth population has been negatively affected by the deep recession, the ensuing environment of prolonged and shallow economic recovery and lacklustre job growth.”

Malaysia is among regional economies with an incidence of youth unemployment in the double-digits, despite a low overall unemployment rate 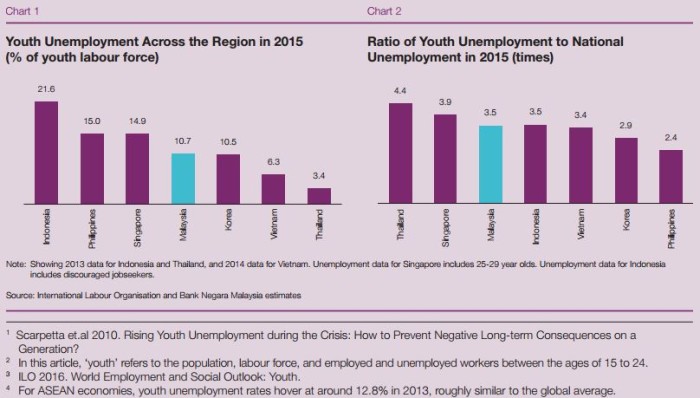 The report also revealed that youths represented more than 50% of total unemployed workers, despite only making up a third of the labour force.

Youth unemployment has been on the rise in the recent period, as the growth in hiring has slowed since late 2014. Cautious business sentiments and moderating economic performance have restrained businesses from expanding their workforce.

The report stated: “They (youth) are likely to be the last to be hired and the first to be made redundant; due to their lack of experience, higher information asymmetry on the labour market, and poor ability to communicate their skills effectively to employers.”

Despite the workforce increasingly becoming more educated, job creation in the Malaysian economy has remained concentrated in the low and mid-skilled jobs, as domestic industries stay in low-value added activities that emphasise cost efficiency and dependence on cheap labour, rather than pursuing innovation as a source of growth.

The Malaysian economy also continues to face the challenge of attracting high-quality investments that would create more high-paying, high skilled jobs for the local workforce. In the meantime, firms point to skills shortage as a key factor which prevents them from making investments to move up the value chain.

This mismatch between the changes in educational attainment of the workforce and the types of jobs created is also manifested to some extent in anaemic demand for fresh graduates, as online job postings for entry-level positions for graduates have remained largely stagnant since 2012. 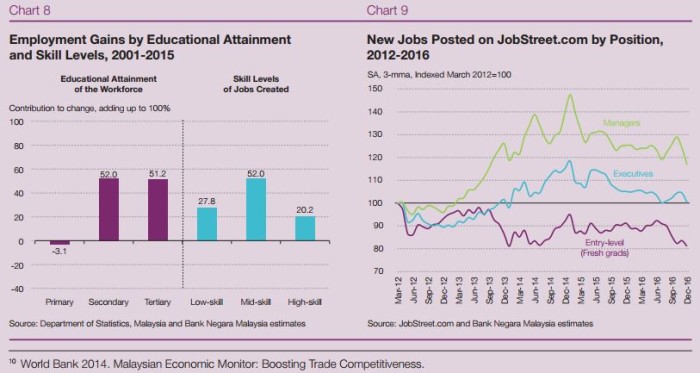 C-suite and staff disagree about support for LGBT employees

HR job moves of the week from GroupM, Willis Towers Watson, Bank of China, and more

Established in partnership with CyberSecurity Malaysia, the centre will enable stakeholders to check the source code of Kaspersky’..

Modest salary increases predicted for 2018 across APAC and globally

While Asia has the highest growth globally, countries such as Singapore, Malaysia, and Hong Kong will still see a slower real wage..

The badges were first suggested by an employee to foster sympathy among coworkers and improve the overall working environment for ..