The most wanted HR positions this year

Human resource generalists are the most sought-after HR professionals in 2015.

That was the key finding of Society for Human Resource Management’s (SHRM) summer 2015 HR jobs pulse survey report, which surveyed 378 respondents from a randomly selected sample of its members throughout the United States.

The report found more than half (55%) of respondents who are hiring HR talent saying they were hiring for the human resource generalist position.

HR professionals with employment/recruitment skills were the second in-demand, coming in at 24%.

That category was followed by people with benefits experience (16%), employee relations skills (13%) and training/development skills (13%).

The report added, however, that only 27% of respondents stated their organisations were hiring for HR positions.

ALSO READ:
HR professionals are increasingly unhappy with their careers

“Hiring for HR positions depends greatly on the size of the company,” said Jen Schramm, SHRM’s manager of workforce trends.

“Larger companies employ more HR professionals so it makes sense that they are more likely to report that they are trying to fill HR positions, especially during a jobs recovery. Improvements in the job market are also making HR professionals more confident about seeking out new opportunities for themselves.”

According to the report, only 1% of small companies (99 or fewer employees) are hiring, while nearly two-thirds of employers with 25,000 or more workers are hiring for HR jobs.

Despite the fact that job opportunities in HR have remained flat since last year, the majority of respondents this year said they could find a new job if needed.

Confidence levels were high especially among experienced HR professionals: 89% of executive-level, senior-level and mid-career-level respondents had some degree of faith that they could find work if necessary.

In comparison, 74% of early career HR professionals had some level of confidence in finding a new job. 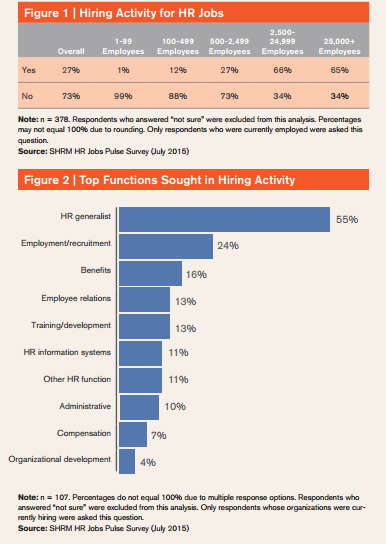 Another 33% pointed to better career advancement opportunities, and 32% said they were seeking better overall organisational culture.

Slightly more than one out of 10 respondents (11%) revealed they were seeking an organizstion where HR certifications are more valued and supported.

Building a family-friendly workplace remains a mere slogan in China

The biggest challenges in implementing mobile learning in APAC

Maybank on the hunt for new CEO

New tripartite guidelines for the employment of term contract workers

Created jointly by MOM, NTUC and SNEF, the guidelines give greater clarity on leave benefits and notice period for contract staff...

The banking company has cut 15 jobs in Singapore, in addition to the 50 in Hong Kong, Taiwan, South Korea and India. ..