About 60% or 150, of Newstead Technologies 250 employees will be retained, while the remaining 100 will be dismissed, Channel NewsAsia reported.

In a press statement to Channel NewsAsia, Newstead Technologies has confirmed it was placed under provisional liquidation last Thursday. Acres Advisory’s Tee Wey Lih was appointed its provisional liquidator and, together with its management team, has completed a reorganisation of the business.

It added: “Newstead wishes to reassure customers that it is still business as usual for all 10 Nubox outlets and selected Newstead stores, and that the company will continue to honour all transactions and service commitments during this transition period.” 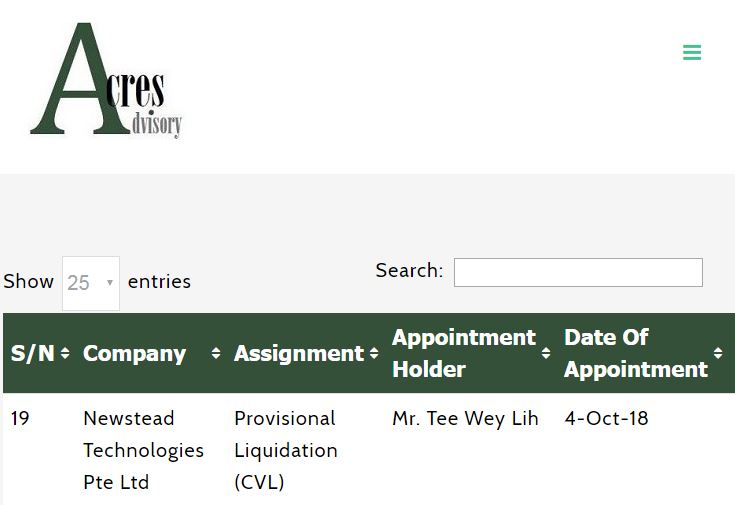 In the press release, the firm also stated it is currently in talks with investors to find a workable solution for all parties involved. It added it appreciated the support of employees, vendors and partners in this time.

A creditors’ meeting has been scheduled for 2 November and the notice for the meeting will be issued in the week of 15 October.

When it comes to its commitment to be the anchor tenant for the redeveloped Funan mall when it opens in the second quarter of next year, nothing was directly addressed.

Home-grown electronics retailer Newstead Technologies, which owns brands such as nübox, Digital Style, and @notebook.com is currently in liquidation.

A listing on the Accounting and Corporate Regulatory Authority’s (ACRA) Business Filing Portal indicated that the company’s status was “in liquidation – creditors’ voluntary winding up”. 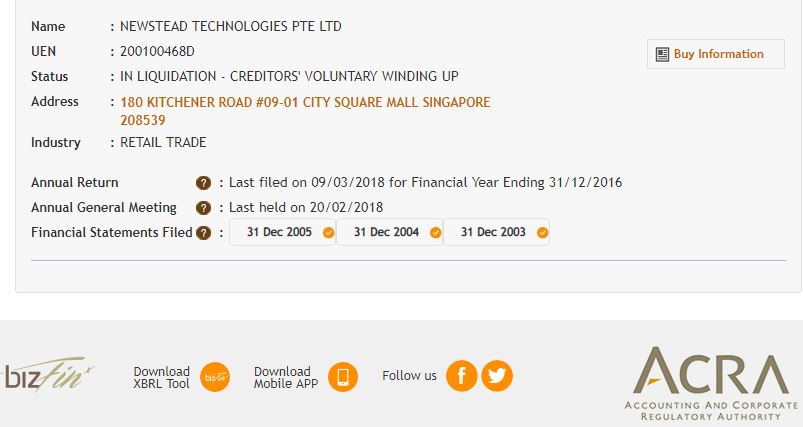 According to The Straits Times, this refers to the process in which a company’s assets are collected and sold in order to pay its debts. Any monies remaining after all debts, expenses and costs have been paid off are distributed among the shareholders of the company. When the winding up has been completed, the company is formally dissolved and will cease to exist.

Though companies may be legally compelled to wind up, shareholders or the creditors of the company can themselves apply to wind up the company in proceedings. This is known as “voluntary winding up”.

The Straits Times also reported that the company had pulled out of an upcoming November IT fair which it has been a major participant of for almost two decades.

However, according to an ongoing thread on online forum HardwareZone where the news first broke on Saturday (6 October), about 300 staff will be affected by this move.

According to a report from TODAY, several of the electronics retailer’s outlets – operating under several brands – in Sim Lim Square have been closed since 3 October (Wednesday), with about 10 to 20 staff members affected. Only one outlet remained open as of Sunday.

TODAY’s report added that the Newstead outlet at Nex which employs nine staff would be “safe”. While an employee the DigitalStyle store at Jurong Point told TODAY that the displays of “clearance sales” signs was just to “purge extra stock” and that it was business as usual.

Singapore in the bottom 10 countries worldwide on reducing inequality

The move will benefit over 10,000 staff, says the firm, which also organises a week-long Singtel Learning Fiesta to train workers...

Is contract hiring the solution to Singapore’s talent shortage?

Specialist contractors are now seeing a higher percentage of jobs available for short-term employment. How can bosses retain them?..

Five predictions for the gig economy

59% of organisations surveyed are using a flexible workforce to some degree..

At “The Learning Academy”, we focus not only on delivering content that engages, but also on fostering a learning culture and empo..

A quarter of Hong Kong workers spend up to a worrying 17 hours a day sitting down on average, a survey finds...