Now professionals have another strong reason for shifting to Singapore to work.

Besides being the best place to live in Asia, the island nation also offers the highest amounts of income in the region, according to a new report from Towers Watson.

The 2014/2015 Global 50 Remuneration Planning Report found base salaries at senior and top management level in the country are around 10% higher than those of their counterparts in Hong Kong.

Executives right at the top of the hierarchy in Singapore were found to have an average base pay of around US$586,000 a year, compared to around US$445,000 a year in Hong Kong – a differential that narrowed fractionally from last year.

“Base salaries are, on the face of it, considerably higher in Singapore than Hong Kong, especially at a top management level, but the tax rates at those levels vary considerably and that has a bearing on take-home pay,” said Sambhav Rakyan, data services practice leader, Asia Pacific at Towers Watson.

“That said, we do see signs of regional HQs moving from Singapore to other lower cost locations, such as Malaysia and Indonesia, to reduce staffing costs, subject to availability of talent.

While base salaries in Singapore remained on top of the table, those in Hong Kong stayed comfortably higher across the board than in Greater China. For production and manual work, base salaries in Hong Kong were found to be around three times those of China, a gap that narrows to around twice entering the junior management and professional grades.

“At the support levels wage pressures reflect the growing pressure for low-cost skilled staff to work in manufacturing and services,” said Rakyan.

“It’s worth noting that the income tax environment in Hong Kong is more favorable than that of China, adding to take-home pay and therefore making Hong Kong more attractive in that sense. To an extent, however, we’re seeing some local Chinese companies responding by introducing a higher percentage of variable pay and equity incentives that are creating challenges for MNCs looking to hire and retain talent in China.”

Overall, salary increases in Greater China and in many parts of the region were very modest, largely a reflection on the low levels of inflation in the region. 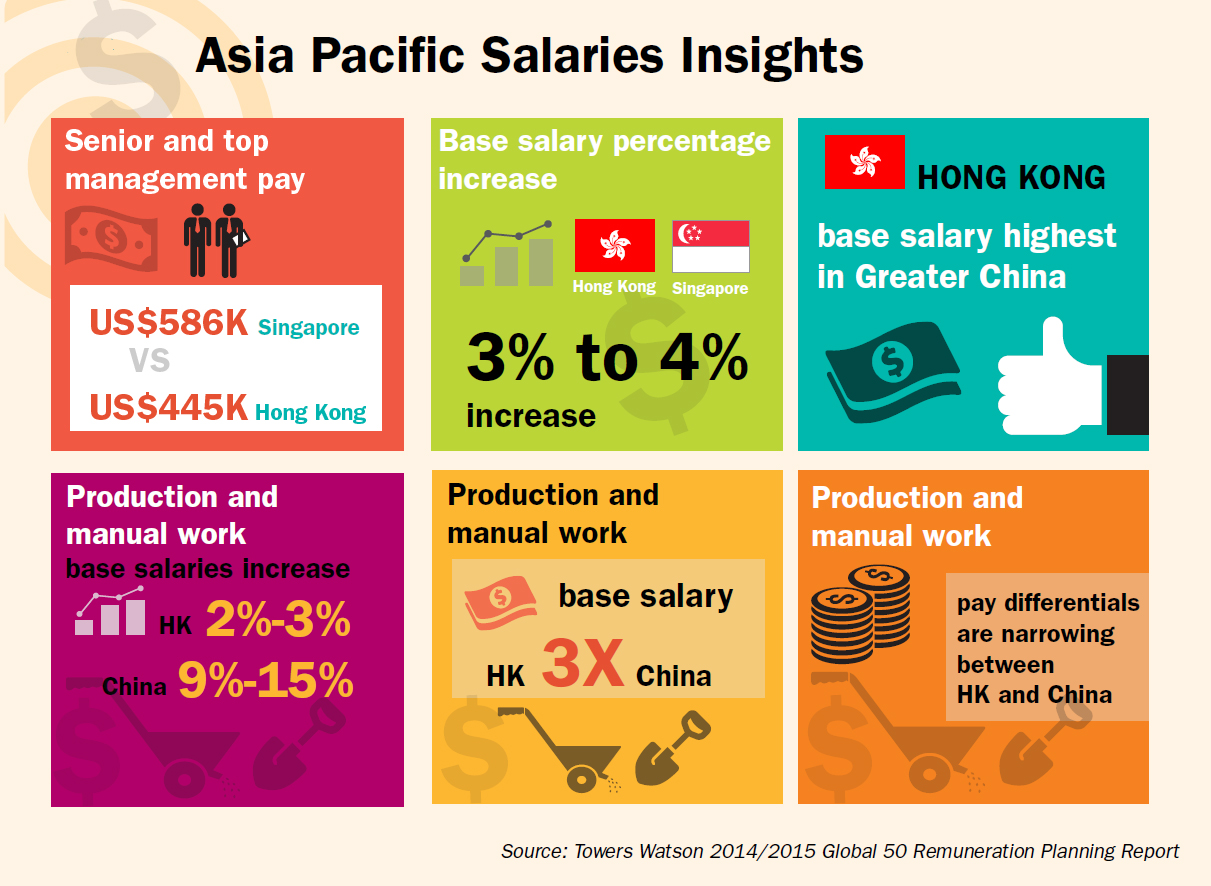 Why female Millennials in Hong Kong are skeptical about flexible working

For a start, ComfortDelGro Taxi targets to send 10,000 cabbies for a customised SkillsFuture for Digital Workplace course by 2020...

Having your dry cleaning done, when you are in the office

Could implementing concierge into our employee benefits help with greater productivity and efficiency?..

Miles was formerly senior director at RGF, and he succeeds Jonathan Guilfoile as Singapore MD...

No major pay increments in the financial services sector