Salary increases dipped in Singapore’s private sector last year, with employees getting 4.9% in pay hikes, slightly lower than the 5.3% offered in 2013.

These were among the key findings of the Ministry of Manpower’s (MOM) Report on Wage Practices, 2014.

The implementation of the tripartite wage restructuring recommendations, released in January 2004, also led to a large majority (89%) of private sector employers introducing some form of flexible wage system in 2014 – the highest since June 2004.

The most common recommendation adopted was to have a narrow maximum-minimum salary ratio, adopted by two in three (66%) private sector employees working in such establishments.

This was followed by linking variable bonus to KPIs (52%) and having a monthly variable component (33%) in the wage structure.

Overall, unemployment declined to just 1.8%, in a year that saw 60,700 more job openings than there were job seekers.

This was in spite of the increasing number of workers who re-entered employment within six months of being made redundant, at 59%.

The rate of voluntary employee turnover went down, at a 2% resignation rate, end of the year’s last quarter. Employees also worked fewer hours at an annual average of 46 hours per week, slightly lower than the figure of 46.2 hours at the end of 2013. 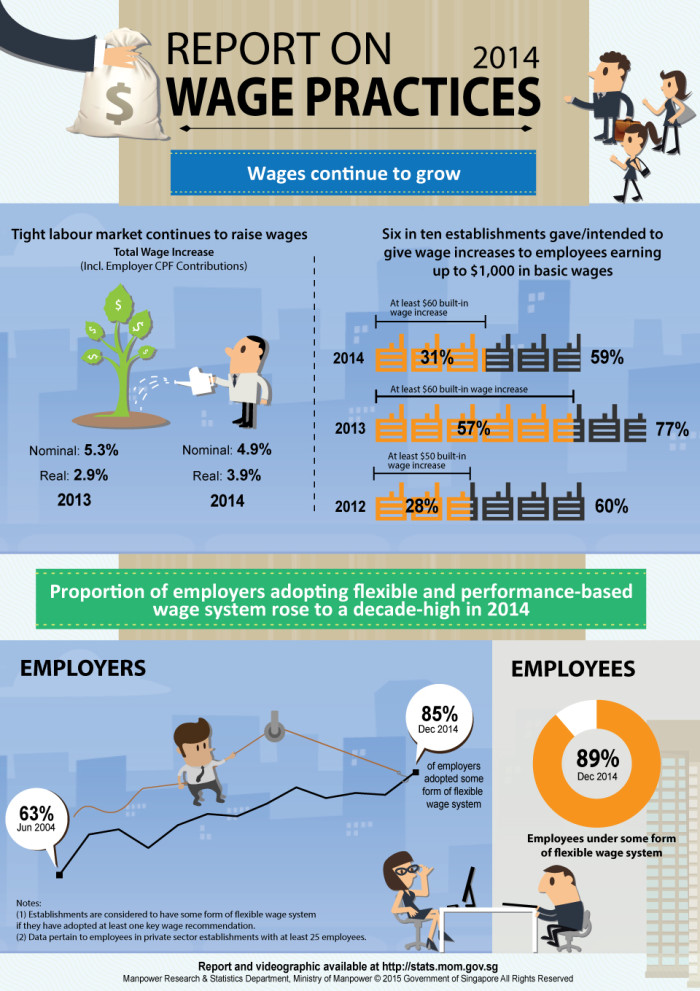 Among the remaining employers that did not grant wage increases, about half (20%) said they were already paying market rate, while others indicated that their business was not doing well.

Lead image by Shutterstock and infographic by MOM

How BlackBerry migrated to an integrated HRIS system

Up the ranks: Michael Piker to head global total rewards for Naspers

Christopher Wei will step down in September to take on a new role as CEO Global Life Insurance and Chairman Asia at Aviva. ..

20% of Singaporeans lie to get time off work

Some of us seem to have no problem lying to our bosses to get a day or two away from the office. ..

The 6 weirdest things to ever happen at work

Have you ever had to unclog the work toilet with your bare hands, or tell a colleague he probably shouldn't eat that spider? These..