How to be the perfect boss

If you want to strike a chord with your Millennial employees, try being ethical and transparent at all times.

Those were among the most desirable qualities in a boss identified by Millennials in IBM’s latest report, which polled 1,784 employees from organisations across 12 countries.

More than one in three (35%) Millennials stated they wanted a manager who is fair and ethical, and also one who is transparent and readily shared information at all times.

Being dependant and consistent was the second most desirable quality ranked by 32% of Millennials.

While having strong moral standards was also the most wanted trait in a boss according to Baby Boomers (35%), employees belonging to Gen X stated they preferred a leader who defined goals and expectations clearly (42%).

Gen X employees were also likely to want a boss who provided pats on the back. Millennials, however, deemed it less important to have a boss who recognised their accomplishments and asked for their input.

“Surprisingly, it’s largely Gen X employees, not Millennials, who think everyone on a successful team should be rewarded,” the report stated.

“Gen X employees are also more likely to believe collaboration and information sharing should be recognised.”

It added the notion that Millennials expect to have every opportunity handed to them on a silver platter and endless praise for their achievements was also palpably false.

“They are no hungrier for accolades than Gen X employees. What they do desire is to be treated fairly.” 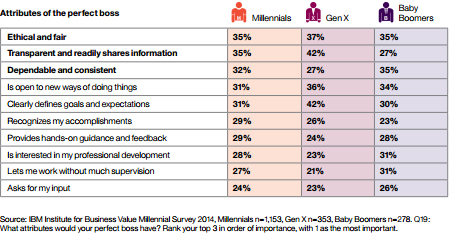 Jobs ads for HR professionals in Singapore rise by 48%

Local firefighters are to be given medical cross-training by paramedics from July. ..

More than 100 employees at 3M have switched careers since 2012 - marketers have become HR business partners and more - here's how...

4 trends to watch in the recruitment landscape for 2017

June’s Brexit result and the US election are watershed moments in history. Here's how they add complexity to your recruitment plan..

Can Asia keep its youngest and brightest?

Asia may be one of the world’s most promising markets, but students are still not convinced. ..