The most popular industries for scholarships in Singapore

Junior college and International Baccalaureate (IB) diploma graduates in Singapore have a better chance of receiving a bonded scholarship from aviation firms.

There was also a significant rise in popularity noted for healthcare and Singapore-industry scholarships. The MOH Holdings (MOHH) – which overseas six different healthcare clusters in Singapore – is now in the top 10 (9th place) of the scholarship providers’ chart for the first time for all graduates. This is a large jump from their 40th placing in 2011 and 33rd placing in 2012.

“One sector that stands out is the aviation sector, which is very much a booming industry – considering the fact that Singapore has one of the busiest airports with a robust air cargo hub and also has a strategic location in relation to half of the global population in the Asia-Pacific region,” Jessica Ang, director of marketing at the JobsCentral Group, said.

“In addition, career opportunities with aviation scholarship providers are also numerous and diverse.”

The survey also identified the factors students deemed important in terms of scholarship applications. Career opportunities with the scholarship provider was the top factor, scoring 8.7 out of 10. This was followed by course of study (8.43), general economic outlook (7.43), destination of study (7.09) and ease of application process (6.46).

Additionally, GCE ‘A’ level and IB diploma graduates also revealed which industries they were most attracted to, compared to their polytechnic peers. 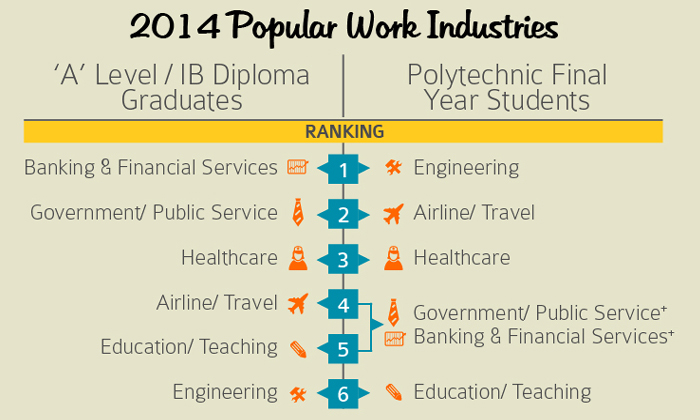 So you want to be an interim manager, do you?

TVB requested the court to forbid “injuring, assaulting or causing any bodily harm to any of its employees”...

The major turn-offs for hiring managers scouting on social media

From 1 April 2020, board members and senior management team will take a 5% to 15% reduction in their board fees and base salaries...

The most annoying behaviours on conference calls

How many times have you cringed when multiple people on a conference call talk at the same time?..

Malaysia's labour productivity by hours worked in 2018 increased 3.4% while it  recorded a growth  of 2.2% by employment...