MOM: Singapore’s employment growth in 2016 was the lowest in 13 years

Amid restructuring and a slower economy, local employment in Singapore grew modestly in 2016, while foreign employment contracted. Unemployment increased for residents and citizens, while redundancies were also higher, per the Ministry of Manpower’s Labour Market Advance Release.

This moderation in total employment in 2016 took place amid slower growth in the Singapore economy, slowdown in local labour force growth and continued tightening of the supply of foreign workforce.

Analysing this , local employment has a greater share to contribute last year, as it increased by an estimated 10,700 (or 0.5%) in 2016. Growth occurred in many services sectors, such as community, social and personal services, professional services and transportation and storage.

On the other hand, foreign employment (excludes foreign domestic workers) contracted in 2016 (-2,500 or -0.2%), the first time since 2009, led by declines mainly in construction and marine.

In December 2016, locals made up 66.4% of persons employed in Singapore (excluding foreign domestic workers), with foreigners forming 33.6%. 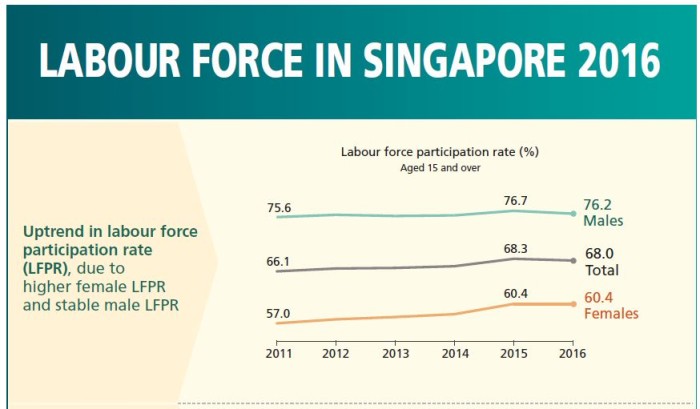 For the whole of 2016, redundancies rose to 19,000, going up steadily since 2010, but remaining lower than the recessionary high in 2009. Layoffs generally increased across all three broad sectors.

Year-on-year, the nominal median income (including employer CPF contributions) of full-time employed Singaporeans rose by 0.7% to S$3,823 in 2016, or 1.3% in real terms (after adjusting for negative inflation).

The Ministry’s preliminary estimates showed that the seasonally adjusted unemployment rate rose for overall (from 2.1% in September 2016 to 2.2% in December 2016), residents (2.9% to 3.2%) and citizens (3.0% to 3.5%). This occurred even as employment grew as more people entered the labour force to look for work.

Reflecting seasonal hiring for year-end festivities, total employment grew in the fourth quarter of 2016 (1,900), compared to the contraction in the third quarter (-2,700), but growth was lower than a year ago (16,100).

Allowing more overseas doctors to work in Hong Kong could ease the load in the city's overburdened public hospitals..

Stress levels are the highest among Singapore’s over-55 employees

Significantly, there is a bump in stress levels at the 35-44 age group, as people tend to enter more senior positions and take on ..

How employees in APAC feel about their career progression, training, and more

Should they stay or go? 70% of employees in Singapore, Thailand, Indonesia, and Malaysia rated career progression as either "extre..

The jobs in Singapore that offer up to $25,000 monthly

Local HR and banking directors are set to earn the most this year, though accounting and sales seniors aren't too far behind eithe..

10 employees you don’t want working for you

If you're having a bad day at work, just be thankful these people aren't on your payroll...

5 things to look out for in a CV

5 things to look out for in a CV