In similar findings yesterday (8 July), a Korn Ferry study on lower-level employees and senior managers showed an increase in pay gap between both levels over the past decade.

In fact, in Asia itself, the average change in pay gap was reported as 15.3%; India saw the highest increase in the region at 65.97%, followed by Malaysia at a significantly lower level (14.73%).

Amongst key Asian countries, the following percentage change in pay gap between 2008 and 2017 was reflected (in order of biggest to smallest change):

How other regions fared

Across the world in the North American region, the United States saw a pay gap growth of 12% , which was significantly higher than the regional average of 9%. At the same time, Canada saw a relatively low pay gap growth of 5%. 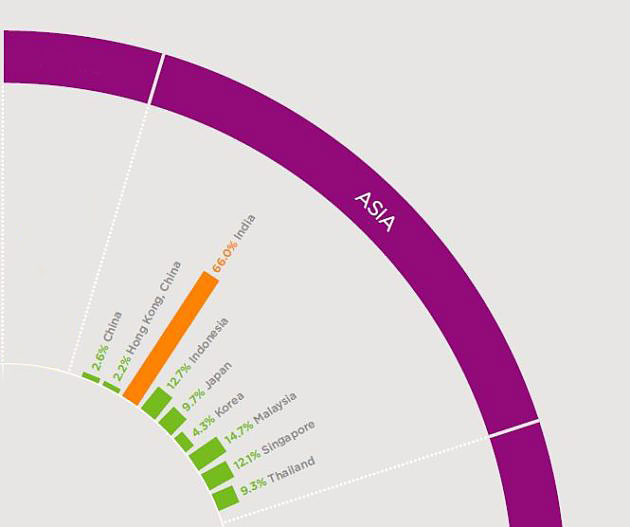 Analysis of the pay gaps: Why do they exist?

Based on Korn Ferry’s analysis, one of the reasons for this widening gap in countries is the existence of automation and offshoring, for instance at the “lower end of these labour markets”. While it has enhanced productivity results whereby there are now more people (labour) available than jobs, it has slowed down the increases in pay.

Bob Wesselkamper, Korn Ferry’s Global Head of Rewards and Benefits Solutions, added: “Meanwhile, at the higher end, there’s a shortage of people with important hard skills and proven experience, such as STEM.

“Organisations also have to compete for senior managers with in-demand soft skills, such as emotional intelligence, creative thinking and the ability to manage large and complex teams. Therefore, pay at this level is going up – and is likely to increase faster than other jobs.”

On the other hand, countries where the wage gap between lower-level employees and senior managers has actually reduced include:

This, the report said, could be put down to factors such as higher tax rates for big earners, fewer pay increases at top levels due to tax rates, as well as government and union intervention for pay at lower levels.

According to Kartikey Singh, Korn Ferry Singapore Associate Client Partner, economic and inflationary growth have played a part in “significant salary increases at the lower level”, which has thus led to a moderation in the pay equity gap.

He said: “Going forward, as businesses feel the pressure of technological disruption and the crunch of good middle and top-level leaders, the gap might widen at a faster pace.”

An innovative approach is needed in how L&D is delivered: What's on your radar?

Are bosses in Singapore not delivering on their HR promises?

Local CEOs aren't living up to expectations of staff on issues such as building a compelling employer brand and good leadership...

While women have come a long way to fight gender disparity, there's still 80 years to go before inequality at work is fully erased..

Tripartite Standards: The standard to look out for

Adopting the Tripartite Standards shows that your firm has good employment practices, and your staff's welfare at heart, affirm ex..

86% of Singapore employees open to hearing from a headhunter

The responsibilities in a possible new job, as well as an estimated salary range, are the top answers they'll want from recruiters..

The state of flexible working in 12 countries, including China, Singapore

The most popular reported benefit of anywhere working is its contribution to a better work-life balance, say 72% staff in China...