This represents a significant growth from only 24% in 2006, according to Willis Towers Watson’s 2016 Asian Trailblazers Study: Masters of Multitasking and Transformation.

The report pointed out these multinationals, known as Asian trailblazers, have had to overcome some HR challenges such as leadership development, are embracing diversity and inclusion, are enabling globalisation through internal cultural change, and are leveraging on consistent compensation and benefits data.

This is despite the fact that the HR teams of these Asian trailblazers have been lean, and often do not have a seat at the C-suite table.

However, they have been able to make up for lost time by prioritising what they need to know and do, by selectively outsourcing when they don’t have the experience or data, and by learning quickly on the job.

One of the ways that Asian multinationals are handling the hectic pace of change is by “leapfrogging” some of the basic changes undertaken by their more developed counterparts, and making radical moves early on.

For instance, in terms of shared service models for support functions, many fast growing “Asian Trailblazers” are not setting up traditional bricks-and-mortar call centres, instead choosing to bypass this earlier stage of HR development and avoid obsolete systems, switching directly to mobile-technology-enabled ones.

Given limited resources, HR and other corporate functions have had to become “masters of multitasking”.

“While in the West, most large firms have experts for specific areas, such as compensation and benefits, managing rewards or talent, and so on, at Asian multinationals there is often only one or two key people dealing with all HR aspects of the organisation at the same time,” said Magdalena Ramada, senior economist at Willis Towers Watson.

“In this way, the HR managers themselves become masters of multitasking, and are comfortable with highly flexible job roles. This is a further advantage when dealing with unexpected challenges.”

The report identifies six areas of focus for Asian trailblazers 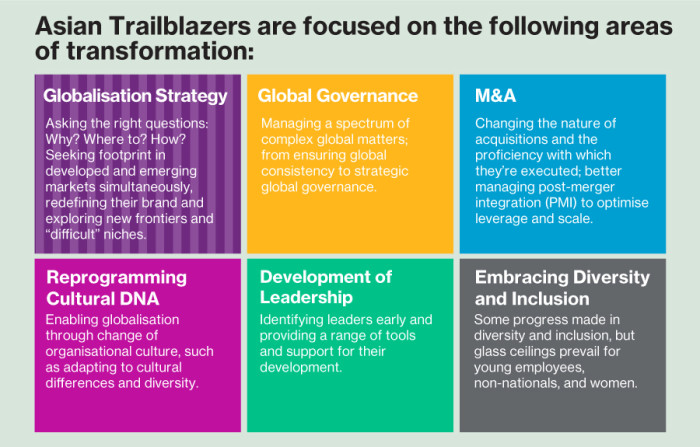 The report also pointed out the the expansion model of Asian firms have shifted from expanding in markets North America and Europe to focus on markets close to home in the region.

“This is likely due to the fact that nowadays, markets are more vibrant in Asia than in the sometimes financially- and demand-depressed markets of the West.” explained  Scott Burnett, Head of Asia at Willis Towers Watson.

But that doesn’t mean Asian firms have an edge, because sometimes more likely to run into greater challenges in markets where they must deal with vastly different languages, fragmented vendors, and underdeveloped infrastructure.

“Cracking these markets will make them formidable competition for their Western counterparts, which are often looking to enter them too. All in all, the lessons learned, and the trail that these multinationals are blazing, gives rise to a valuable growth story that all global companies can learn from.” said Burnett.

Is HR failing as a function?

Why is HR, in many instances, getting increasingly distanced from what employees really need? ..

How social distancing helps safeguard your workplace from coronavirus

Social distancing can not only make your employees safer, it can help to flatten the COVID-19 curve and significantly reduce the n..

Tech companies - Google, Facebook, Amazon, Microsoft - dominate the employees' ratings, while Shell is the only energy company to ..

New research finds the widely believed "10,000 hours of practice" rule is not the magic number when it comes perfecting a skill. ..