It doesn’t take a genius to know that happy employees are also productive employees. So why then, are bosses not promoting staff happiness in the best of ways?

A new Blackhawk Engagement Solutions’ survey found that employee rewards and recognition may not be aligned with what actually makes employees happy and more productive.

Polling more than 1,800 employed Americans, it found only 42% of staff are happy with the rewards and recognition that their companies offer.

To make things worse, 38% of respondents reported that their employers currently offer no rewards or recognition at all.

“Gone are the days when all-expense paid trips and merchandise hold much weight to make employees happy, productive or motivated,” said Rodney Mason, GVP of marketing at Blackhawk Engagement Solutions.

“Our research demonstrates that employees want recognition for their contributions, and rewards for exceeding expectations, putting in extra hours and working beyond their responsibilities.”

When it came to the type rewards they would most prefer,  more than half (55%) employees reported that they would be happiest if offered bonuses.

However, only 36% of bosses stated they offer bonus programmes in their employees.

Likewise, while 50% of employees stated they would like recognition from their employers, only 35% of bosses provide such recognition.

“There’s a conspicuous gap between the rewards employees receive as part of recognition programs, and the rewards they’d prefer to receive,” the report stated. 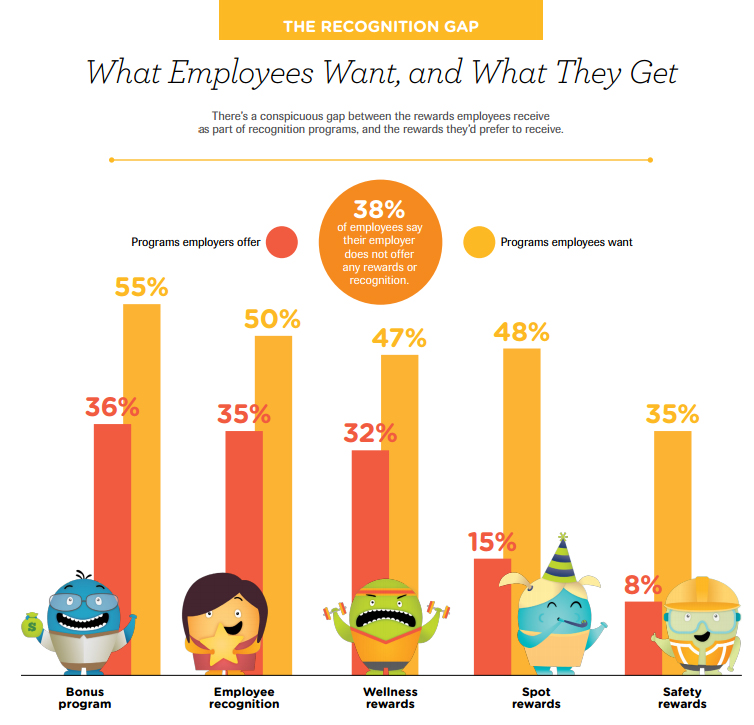 The study also delved into the occassions when employees want to be the most recognised.

A majority (82%) stated they wish to be recognised when they exceed their personal performance levels.

In addition, they also want to be recognised when receiving a promotion (79%), exceeding team performance levels (77%) and achieving a milestone for years of service (69%).

Who should be in charge of employee engagement?

Nanyang Polytechnic and WDA set up productivity centre for students

Singapore to pass Hong Kong in growth rate of millionaires

This is where Google and Apple scout for talent

With the war for talent refusing to subside, where are the top technology firms hiring their employees from?..

Beyond an annual raise (65%) and major medical insurance (60%), among top items on a Millennials' benefits list is an annual promo..

Tan Chuan-Jin: Graduate underemployment low, but we are “not immune”