In today’s workplace, almost everything can be considered as bullying, even unfriending a colleague on Facebook.

While most might think workplace bullying only occurs once in a blue moon, it is actually more common than we think.

According to recent research from OfficeTeam, while only 27% of HR managers interviewed said they think workplace bullying happens somewhat often at their company, about one in three (35%) workers surveyed admitted they’ve had a bully in their office.

So how do these victims of workplace bullying usually deal with the situation?

Interestingly, 32% would respond to the bully by confronting the person.

Almost three out of 10 (27%) revealed that they would inform their manager about it, while surprisingly, 17% did nothing.

“Workplace bullying often flies under the radar because employees tolerate or fail to report it,” said Robert Hosking, executive director of OfficeTeam.

“Managers and staff alike should be supported in addressing bullying issues. This includes not giving anyone a pass for negative behavior, no matter how valued that person may be.”

Bullying, though a seemingly insignificant situation, has actually been found to drive 20% of employees to quit their jobs – a nightmare for HR managers in today’s situation of talent shortage.

Hence, it is a must to deal with workplace bullying promptly and effectively.

READ MORE:
Managing your workplace beasts
Why the office bully has the best job security

Thankfully, OfficeTeam has put together five easy tips to help employees who are victims of workplace bullying you can print out and circulate around the office if necessary:

1. Take a stand for yourself
Since bullies often back off if you show confidence and stick up for yourself. Victims and potential ones can avoid being an easy target by showing more confidence or standing up to the bully.

2. Talk it out
One-on-one discussions with the bully, can help as it is possible that the person is unaware of how his or her actions are negatively affecting others.  During the discussions, it is best to provide examples of behaviors that made you feel uncomfortable.

3. Keep your cool
While it is tempting as it is to go tit-for-tat, it is not advisable to stoop to the bully’s level. Professionalism is valued in the workplace, hence it is best to stay calm and professional.

4. Document poor conduct
Put on your investigator badge, it’s time to collect some evidence. Victims are encouraged to maintain a record of instances of workplace bullying, detailing what was said or done by the individual.

5. Seek support
While it might be embarrassing to run crying to your manager HR department at every little thing, do not hesitate to seek support from them if the issue is serious or you aren’t able to resolve it on your own.

Additionally, Human Resources  has reached out to HR experts for some tips to keep workplace bullying low in your company.

She advised that to mitigate workplace bullying, companies should firstly “communicate the importance of mutual respect through corporate documents such as policy handbooks”.

They should also have “a clear escalation and management process readily available to staff who may be/have been subject to workplace bullying”.

Thirdly, she added that firms should “take grievances seriously and investigate them immediately and deal with it in a fair manner”.

“Ensure everyone in the organisation knows the consequences of bullying and that it is not to be condoned,” she concluded. 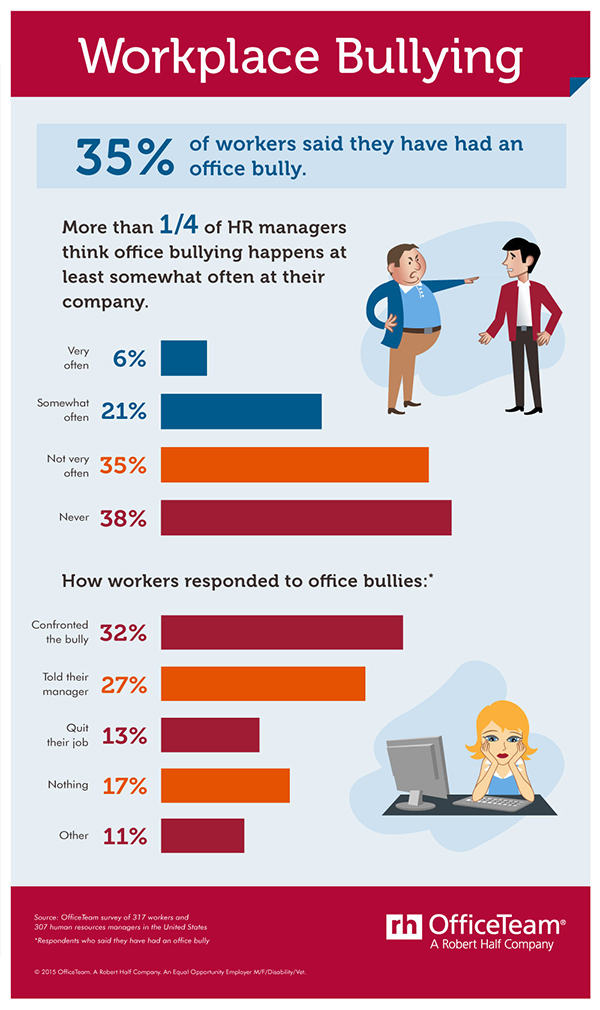 HKUST-Kellogg EMBA graduates earn the most in the world

10 ways to build a culture of curiosity

How to play your 3 authenticity cards – heart, habit and harmony

"Stand by what you believe in, but be quick to admit your mistakes," affirms award-winning researcher and professor of leadership,..

"It is important to give people room to 'move'. In other words, to empower them to go about their tasks," asserts Datuk Mark Rozar..