[Updated] How P&G is driving gender equality at work

– With inputs from Jerene Ang

The P&G #WeSeeEqual Symposium was attended by around 200 employees from various business units. It included a keynote by Tina Tchen, former White House Director for Women and Girls, former Chief of Staff for Michelle Obama, and currently Legal Counsel for Time’s Up Movement, on leading change to empower women. [read more on her presentation]

The symposium also included the unveiling of 30 power portraits, revealed by minister Heng Chee How.

When asked about the reason behind the unique power portrait showcase, a spokesperson from the organising team of the #WeSeeEqual Symposium told Human Resources, “In APAC, 50% of managers are women, and with this being a women symposium, we want to recognise these people. We thought power portraits would be a good way to recognise them.”

During the process of shortlisting the women profiled in the series, the organising team asked P&G employees for nominations of women based in Singapore who have inspired them or have transformed their lives.

Out of the close to 80 nominations received, the final 30 were selected via clear criteria which included – if the person contributed beyond the norm of what they are expected. 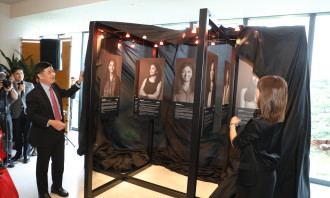 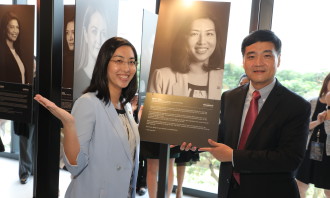 SMS for PMO Heng CHee How posing with P&G employee 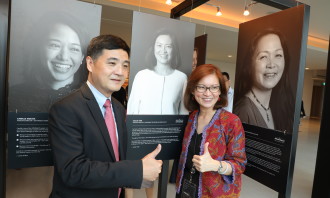 SMS for PMO Heng CHee How posing with P&G employee

Following up on the launch of its global initiative #WeSeeEqual in 2017, P&G today hosted the inaugural #WeSeeEqual Symposium in Singapore as part of its effort to drive gender equality. Attended by Human Resources, the symposium is aimed to inspire people to become advocates for change within the workplace and communities; and was attended by guest-of-honour, senior minister of state, Prime Minister’s Office, Heng Chee How.

In the release, Magesvaran Suranjan, president of P&G Asia Pacific and P&G India, Middle East and Africa, said: “At P&G, gender equality is ingrained in how we operate and we want to break down the barriers women face in the Asia Pacific region, helping to empower them to succeed in their careers.”

“Through #WeSeeEqual, we aspire to create a better world for everyone – one with equal representation and an equal voice for men and women. We know that when women have a voice and the opportunity for full representation; businesses perform better, economies thrive and communities are healthier.”

Meanwhile, minister Heng Chee How, commented: “Valuing and tapping into the abilities and potential of every member of society is not the only fair thing to do, it is also the wiser option.”

“Women are half of the population and have tremendous additional contributions to make on merit. Singapore will benefit immensely from this great source of positive energy,” he added.

P&G is focused on creating an inclusive, gender-equal environment internally through support systems that lead to 50-50 representation of men and women at all levels and all parts of its company. In fact,  P&G has an initiative called ‘Men as Allies’ which helps ensure that all men in our organisation are committed and involved in balancing the scale.

In the release, said: “Gender equality is a shared dream – and, more importantly, it is within reach. It is about walking the talk and leading the change to See Equal every day of the year.”

Snapchat reduced about 7% of its global headcount

Ask these 5 questions to reveal a candidate's true self

Up the ranks: Martin Cerullo leads talent and engagement at The Dairy Farm Group

As the new group talent and engagement director, Cerullo will focus on strengthening the firm’s talent and functional capabilities..

A take on career aspirations of women leaders in Singapore

If you believe that opportunities in your organisation don't go to the most deserving candidate, you're not alone - 60% of women a..

A 35-year veteran with the company, Chris Johnson will be CEO of Zone Asia, Oceania and Sub-Saharan Africa (AOA) effective 1 Janua..

The first ever Human Resources Excellence Awards Singapore went off with a bang last night. Here are some photo highlights of the ..