Filipino Millennials optimistic about the future, but worried about conflict

Despite uncertainty around the world and toxic divisiveness in their own country, Filipino millennials, or Phillennials, are among the most optimistic globally when it comes to the future.

Results from Deloitte’s 2017 millennial survey released by Deloitte Southeast Asia member firm Navarro Amper & Co. (NA&Co.) showed that 89 percent of Phillennials expect the overall economic situation in the country to improve in the next 12 months, significantly higher than the global average of 45 percent and the Southeast Asia average of 53 percent.

An overwhelming proportion of Phillennials – 84 percent – also have a rosy outlook for the country’s social and political situation, while only 36 percent of their peers globally share that sentiment about the general sociopolitical situation. 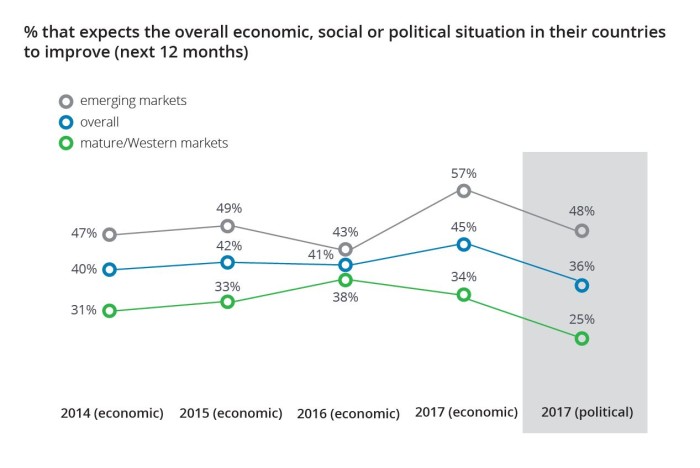 The 2017 Deloitte Millennial Survey is based on the views of almost 8,000 millennials from 30 countries. Participants were born after 1982, have a college or university degree, are employed full-time, and work at predominantly large, private-sector organisations. In the Philippines, 300 millennials – equally split based on gender – were interviewed. Legwork for the survey was done in the last quarter of 2016.

In a reverse from last year’s survey results, economic optimism among millennials in emerging markets is on the upswing and is, in fact, at the highest level recorded in the study. Meanwhile, confidence among their peers in developed markets has slumped. Notably, lack of optimism regarding “social progress” is most evident in Belgium, France, Germany, and the UK – nations that are now dealing with the reality of Brexit and the rise of far-right populism. Meanwhile, greater optimism is seen in the Philippines, Brazil, India, Indonesia, and Turkey.

On a more personal level, most Phillennials also expect to be financially better off (84 percent) and happier (76 percent) than their parents. Globally, those figures stand at just 26 percent and 23 percent, respectively. 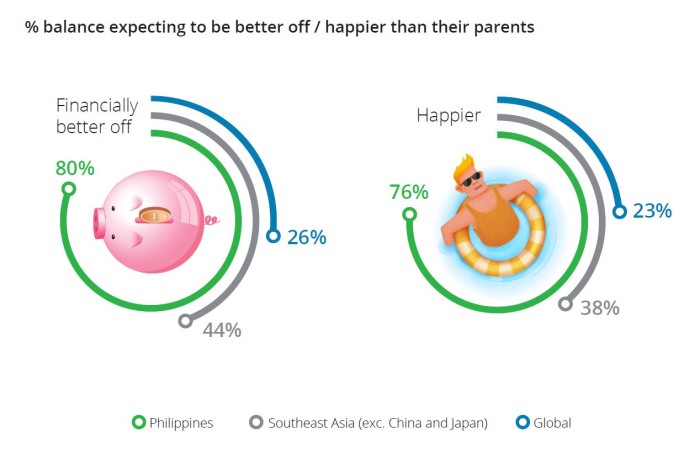 What millennials are worried about

To better understand the millennial outlook, Deloitte asked respondents about issues that are of greatest concern to them.

A broad spectrum of issues surrounding conflict – such as terrorism, political instability/tension, and wars/conflicts between countries – emerged as issues that span the market maturity divide, with almost 6 in 10 (56 percent) respondents in mature markets and 4 in 10 (42 percent) in emerging markets citing these as a concern. For Phillennials, terrorism emerged as the topmost concern: 40 percent of them admitting it worries them, while 35  percent cite crime/personal safety as a great concern. 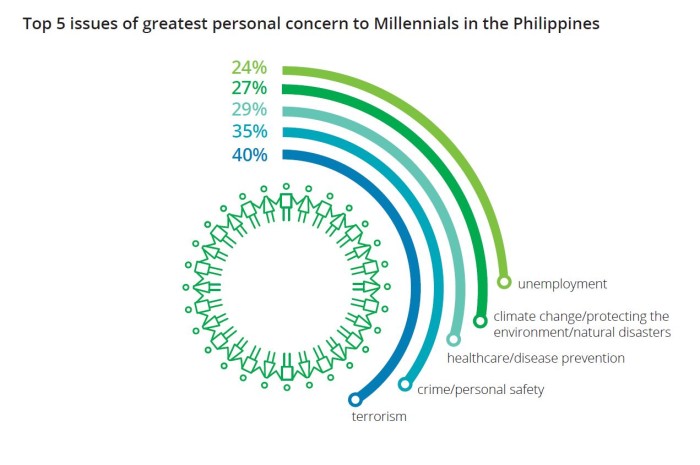 “This tells us that the soaring optimism among Phillennials is not without its chinks,” says Greg Navarro, Managing Partner & CEO of Deloitte Philippines/NA&Co. “While Phillennials feel good about the country and their own prospects for success, this sentiment is tempered by the reality surrounding them. But if you look at how millennials are getting involved – on social media, in the streets – you can say that they aren’t simply sitting back and letting these issues overwhelm them. They are making their voices heard and participating in the national dialogue.”

Perhaps one factor fueling Phillennials’ confidence is their belief in the ability of key institutions to address their worries: More than 9 out of 10 Phillennials feel that not only does the government have the ability to solve the issues that worry them, it has already made a positive impact in addressing these problems. They are only slightly less confident in the ability of corporations – multinationals and local companies – to do the same. 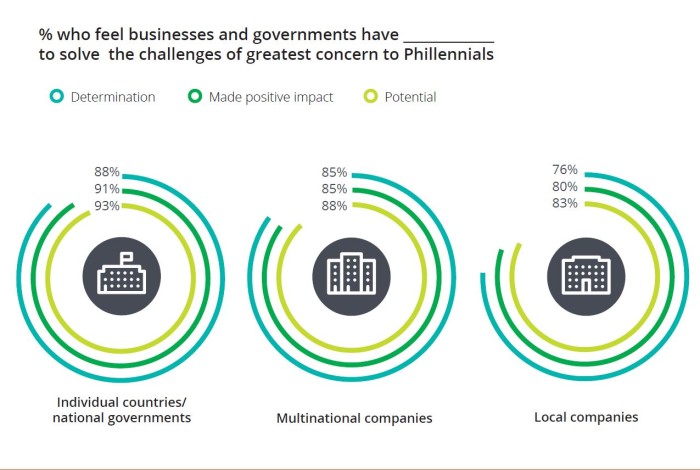 Indeed, Phillennials’ belief in the inherent good of businesses continues unabated, with 94 percent of them saying businesses have a positive impact on the wider society, up from 93 percent in 2016 and well above this year’s global average of 76 percent.

With the recent rise of unconventional leaders such as Presidents Rodrigo Duterte and Donald Trump, Deloitte also asked millennials where they stand with regard to the way politicians and business leaders behave.

For Phillennials, there seems to be a slight difference in expectations: While nearly 8 out of 10 (78 percent) Phillennials approve of political and business leaders providing opinions with passion, only 66 percent agree that business leaders should use plain, straight-talking language to express those opinions. A bigger proportion – 69 percent – believe it is acceptable for politicians to speak that way. 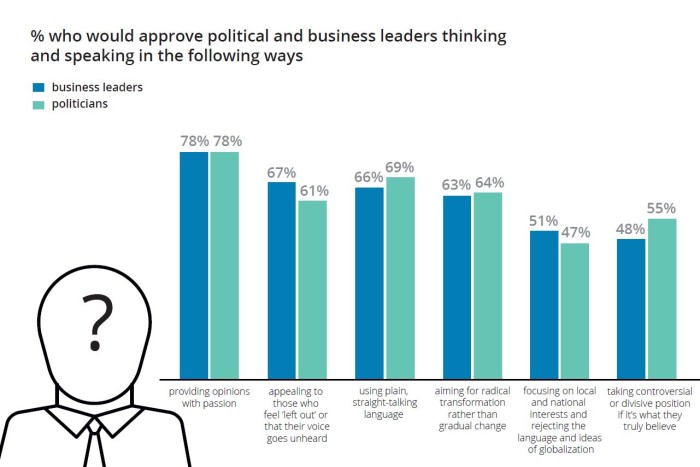 A similar disconnect can be seen in Phillennials’ attitude towards leaders who take controversial or divisive positions: Only 48 percent think it’s acceptable for business leaders to do so, but when it comes to politicians, they are more lenient – 55 percent approve of such behavior among their political leaders.

Phillennials seem to approve equally of business leaders and politicians who aim for radical – as opposed to gradual – change.

“This could be the result of media being saturated with coverage of these shoot-from-the-hip leaders, or it could be that millennials have always just preferred passionate, straightforward leaders. Whatever the case may be, there’s no denying that the management style that works best for this generational cohort is very different from what Baby Boomers and even Gen-Xers grew up with,” says Navarro. “In order to attract and retain talent, business leaders will have to be mindful of this preference and adjust accordingly.”

Another issue Deloitte has been tracking in its survey is millennials’ sense of empowerment and accountability within the context of their workplace.

Trend data shows that businesses that make CSR a cornerstone of their mission and which involve millennials in such initiatives boost this generational cohort’s sense of empowerment and, as a result, increase their levels of loyalty.

“With millennials worrying about conflicts here and abroad, it’s no surprise that they are looking for stability and certainty, especially in areas where they have control, such as their careers,” says Navarro. “That being said, business leaders should remain proactive in keeping these employees engaged. Our survey also revealed that 61 percent of Phillennials plan to stay no more than five years in their current jobs. That’s a significant potential loss of talent that would be difficult to replace in this highly competitive labor market.”

One way employers can gauge their millennial employees’ engagement is to look at the aspects of their work that they feel they are most accountable for,  and then determine if these millennials believe they have enough influence over these matters. 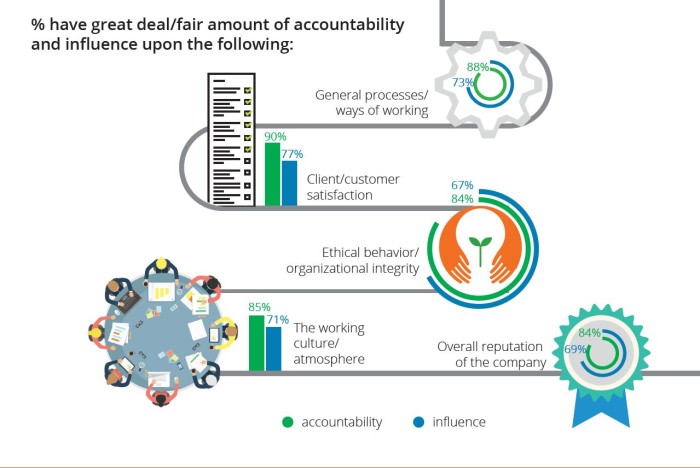 “Business leaders can look at these areas as sign posts for improvements,” says Navarro. “It’s encouraging to see that most millennials are aware of their responsibilities at work, but where they express inadequate influence, business leaders can zero in on those areas and work to empower or train their millennial employees so they feel they have more control over outcomes and results.”

The 2017 Deloitte Millennial Survey is based on the views of almost 8,000 millennials from 30 countries. Participants were born after 1982, have a college or university degree, are employed full-time, and work at predominantly large, private-sector organizations. In the Philippines, 300 millennials – equally split based on gender – were interviewed. Legwork for the survey was done in the last quarter of 2016.

What Hongkongers need to do to get ahead

Snapchat reduced about 7% of its global headcount

Primary affecting roles in engineering and sales, it expects to recognise savings of approximately USD$25 million in 2018 as a res..

Hiring outlook for Hong Kong in 2018

Job seekers can expect a favourable hiring climate in the first quarter of 2018 with Hong Kong projecting double-digit growth...