Most of us are probably familiar with the ‘dog ate my homework’ excuse from our schooldays.

Now an employee at a company in the US state of Oklahoma has gone one better by using the excuse of getting a tyre puncture caused by a nail in her car during their morning commute to work, it was reported on the HR Grapevine website.

The only problem is that she has been rumbled by her boss when she apparently sent a photoshopped image of the tyre with a nail in it, to justify the supposed cause of her workplace tardiness.

The employee was subsequently called out by a colleague, who made note of the indiscretion via twitter (pictured below). 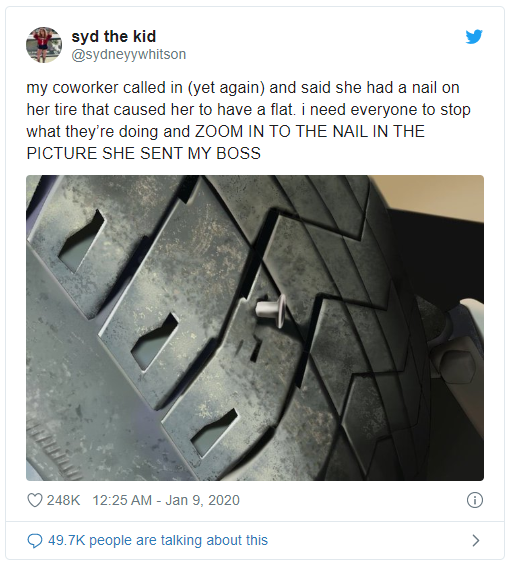 The twitter post attracted a range of lively responses with one user tweeting: “Girl that tyre isn’t even real lmao.”

To which the colleague quipped: “Right? We googled it and it was the first picture to pull up when you type in ‘nail in tyre’ lol.”

To which one bright spark added: “Hahaha! I think she nailed it.”

Some other kind-hearted tweeters then helpfully shared their own flat tyre images – with tongue-in-cheek encouragement to users to use them next time they wanted a reason for being late.

Also read: The 10 most popular reasons to call in sick

According to a survey by employment website CareerBuilder, the top five common reasons employees have given for being late or absent (excluding illness) are:

Esprit to cut 40% of jobs globally

Wealthy, not-so-smart kids are 35% more likely to go on and earn more than not-so-rich, clever kids. Recruitment bias, much?..

Second half salary outlook for 2018 in Hong Kong

CHROs as you start yearly appraisals, consider raises and bonuses use this report for the projected H2 salaries. ..

What are employers in Asia looking for in contract workers?

Dispelling the myth that contract staff are poorly-educated, most such workers today have more than 10 years of experience...