Indonesia – Mita Diran, a 24-year-old copywriter, passed away this week after slipping into a coma and suffering heart failure.

She died a day after tweeting: “30 hours of working and still going strooong.”

Diran was an employee of Young & Rubicam’s (Y&R) Indonesian arm, and had been tweeting about the long hours she was putting in at the agency in the weeks leading up to her death.

Y&R has expressed their condolences for the young women’s death, and said in a statement it would shut its Indonesian office for a day out of respect for Diran. 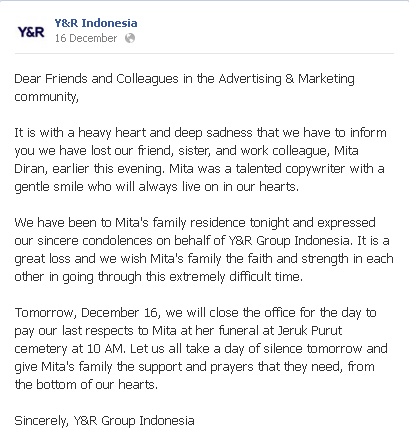 The cause of her death is still being investigated.

In May this year, another young agency employee, Gabriel Li, suffered a heart attack in his Ogilvy China office and died, after having reportedly clocked out of work at 11pm every day for a month. Li was also 24.

Moritz Erhardt, a 21-year-old intern at Merrill Lynch, was also found dead in his London apartment after reportedly working three nights in a row.

[ALSO READ: 5 warning signs your staff are burning out]

Developing talent for the service industry

90,000 employers in Singapore to receive S$600mn in Wage Credits by this month

Eligible employers will receive letters from IRAS. Wondering if you'll be among the 90,000? We answer some FAQs here...

A majority of women confess they don't believe they can be successful both at home and in the office. As a boss, how can you help?..

Human Resources welcomes Lennard Boogaard, VP of HR Southeast Asia and Australasia for Unilever, on board the panel of judges for ..

A recent study reveals it makes up 47% of overall employee visits to clinics. Here's what HR should know...

The five skills managers most commonly lack in the workplace

Despite some managers being rated 'good' or 'world-class' by their employees, this skill still came up as one of the critical skil..