According to the Harvey Nash CIO Survey, nearly 60% of 3,200 CIOs and technology leaders globally admitted the skills shortage was a significant problem – a huge 20% increase from last year.

This current technology skills shortage is the most severe its been since 2008, when it was a reported at 54%.

“The skill that has experienced the biggest growth in scarcity since last year was change management, suggesting that competitiveness for growth, and the associated major changes required to achieve this growth, are at the top of many CIOs’ lists,” the report said.

A huge majority of respondents (90%) also reported concern about retaining the best IT talent, and believe the best retention strategies were placing the right talent in the right role (54%), mentoring (53%) and management training or education (48%).

Within APAC, the talent was even more severe – 76% of regional respondents said the skills shortage will have a business impact, 16% higher than the global average.

However, 49% of APAC respondents said they intend to increase IT headcount, 7% more than the global average.

CIOs in the region were also found to be planning a move; 13% will switch jobs in less than a year, 25% plan to do so in one to two years, and 41% plan on moving within two to five years.

The top priorities of APAC CIOs were identified as being mostly within the business.

“Much like their peers from all across the globe, CIOs from APAC are intently focused on internal priorities, including saving costs, driving operational efficiencies and delivering stable IT performance,” the report said. 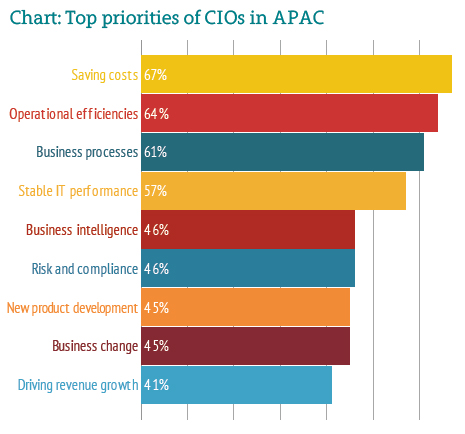 A fifth of those identified as potential CIOs (IT managers, senior architects, analysts and associate directors) were also found to be more likely dissatisfied with their salaries, with 34% of future CIOs unhappy with their pay checks compared to 28% of current CIOs.

Microsoft founder Bill Gates hosted an Ask Me Anything (AMA) session on Reddit yesterday, giving advice to entrepreneurs and answe..

What not to say in a job ad

If you find yourself wishing you'd get more responses to your job postings, pay close attention to the words you use...

How many square feet of office space in Central can you rent on your salary?

As part of WSH2028, key strategies which will drive the next lap of the country's WSH journey include 'strengthening WSH ownership..