Despite previous studies showing that the workplace gender gap won’t close till 2095, new research shows 73% of global senior executives believe that the year 2030 will bring gender equality in the top ranks of most large global companies.

The global study, sponsored by Weber Shandwick and KRC Research and conducted by The Economist Intelligence Unit (EIU) found the “push” forces towards gender equality are likely to overwhelm the “pull” forces holding it back.

Some of the these push forces included increasing media coverage, more women aspiring to a C-level position, awareness that diverse gender perspectives lead to better business performance, and more Millennials seeing the importance of gender equality.

More than two-thirds (68%) of executives have noticed increasing media coverage, including social media, drawing public attention to the issue of gender equality.

With a threefold increase in worldwide articles about female CEOs since 2010, it is safe to say their perceptions match reality.

Apart from that, 76% of non-C-level women aspire to a C-level position, as compared to 56% of their male peers.

76% of Millennials have expressed that gender equality in the C-Suite is important to them, compared to 44% of Gen Xers and 48% of Boomers.

Alongside, more than one-third of executives involved in gender equality efforts have acknowledged that diverse gender perspectives lead to better financial performance.

“Companies need to prepare now to accept women into their senior ranks and take action to support their view of the future,” commented Tyler Kim, Weber Shandwick’s head of corporate and crisis, Asia Pacific.

“The good news is that we are now at a point reminiscent of past social movements where periods of inertia and passive support are abruptly overcome and goals suddenly become within reach,” added Leslie Gaines-Ross, chief reputation strategist at Weber Shandwick.

ALSO READ: 43% of Millennial women are confident about receiving equal pay at work

However, the study also found that 56% of global C-level executives reporting that formal goals have not been adopted by their organisations to turn this expectation into a reality.

Furthermore, only 39% see senior management gender diversity as a high business priority, ranking it seventh among the top 10 priorities.

“In the absence of such proactive steps, women appear to be developing ‘gender pipeline fatigue’ and have come to believe that only through compulsory measures such as governmental mandates on equal pay will parity result any time soon,” the press release stated.

In view of the findings above, does C-suite gender equality still seem achievable in 15 years time? 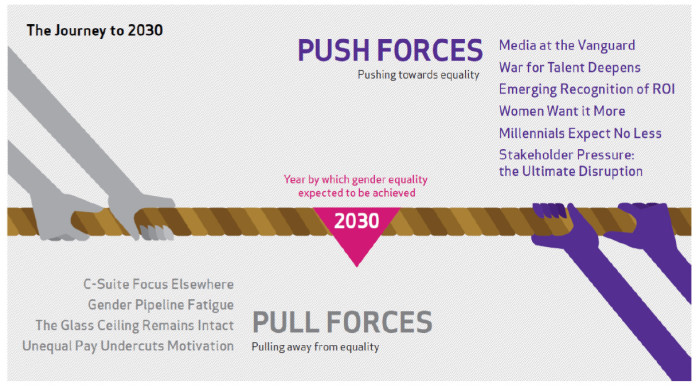 How apprenticeships can fill the talent gap across Asia

MOM reports there were 143 job openings per 100 seekers in March 2015, amid falling employment rates in manufacturing and construc..

How to retain your most talented employees

Here are some great suggestions for you to ensure you keep your most talented employees happy...

Leaders from Citi, Marina Bay Sands, Takeda Pharmaceuticals, and more, share their stories as well as tips on how organisations an..

Companies in Asia are expecting the number of short-term assignments to increase this year, as global mobility continues to play a..