A company in China decided to help employees cope with stress by embarrassing them in public.

One day after China’s Labour Day on May 1, a cosmetics company, which has not been identified, asked its staff to crawl around the Chongqing People’s Liberation Monument as part of a training exercise, chinaSMACK reported.

The activity, which attracted a large crowd of onlookers, was interrupted when the police were called in.

“Through investigation, this was an exercise a cosmetics company gave their employees to train them to deal with pressure, and the police have already persuaded them to leave and have also criticised and educated the organisers of the company,” the Chongqing Yuzhong District Public Security Sub-bureau posted on micro-blogging site Weibo. 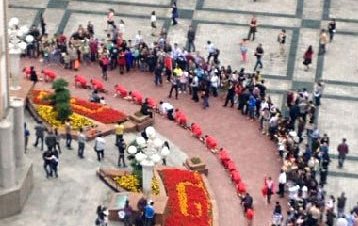 It has also drawn a lot of flak among the internet community.

“This company sounds good on paper but to do this kind of thing, disregarding employee dignity, is just down right bad,” a netizen wrote on sohu.com.

Another said it was “ridiculous” for employers to consider the event a “training and team building” exercise.

“Why don’t these employees just refuse? Is this job really worth that much?” he asked.

Spacial Awareness: The rise of co-working

3 things to know about Singapore’s under-34 employees

Local Millennials' priority is to make a lot of money (31%) - but they are not too enthused about managing a team (3%)...

Only 50% of senior executives are highly engaged, followed by high potentials at 33% and only 15% for first-level leaders...

jobsDB.com Malaysia to shut down

jobsDB.com will shut down its Malaysia office as well as website, come midnight of May 31, 2015...