Managing underperforming employees is a challenge for many businesses – and comes with numerous potential pitfalls. However, terminating the contract of individuals whose work is substandard is equally important to protecting a business’s productivity, as well as the morale of other employees.

Having said that, a new report by TMF Group suggests that APAC is the most difficult region in which to manage termination processes. This is because in a majority of jurisdictions (46%), employees must be given 5-8 weeks of notice before being fired.

For example, TMF’s experts in Indonesia report that multinationals often give workers short-term contracts of six months to a year because it is so costly to fire permanent staff.

Meanwhile, in the United States, same-day firing is permitted in 52% of jurisdictions. Further, employers are required to cite a reason for the termination in only 46% of jurisdictions in the US – compared to two-thirds globally.

This data is summed up below: 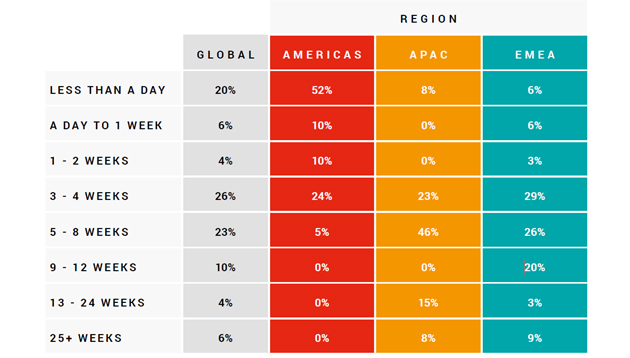 How complex is it to hire overseas staff or gig workers?

However, it was the US that made it relatively easiest to hire staff from overseas with a rating of 5.9.

Given the complexity of hiring overseas workers, jurisdictions that boast a highly-skilled labour pool are very attractive to investors. Local fluency in English – considered the international language of business – adds to a jurisdiction’s appeal. 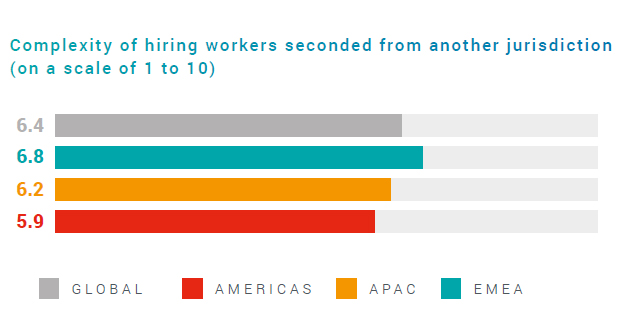 When it comes to hiring subcontractors, the APAC region scored 4.2, making it the least complex of the reported three regions for hiring subcontractors. The global average is 4.5. This means that businesses in the region are able to hire short-term contract workers with greater ease and agility in response to changing business demands.

However, with the growth of the “gig economy”, the report also highlighted that governments in the region are increasingly taking the responsibility to protect workers from exploitation and income inequality.

In Singapore, for example, the tripartite workgroup has provided recommendations to protect subcontractors, such as requiring businesses to use written contracts for short-term workers, having more government agencies involved in mediating payment-related disputes, and enforcing CPF contributions.

On compensating employees, most jurisdictions globally require employers to offer their workforce a set of ‘traditional’ benefits, such as maternity leave and paid vacation time. But the report shows that Singapore is one of just 33% of jurisdictions in APAC to offer shared parental leave, and it also provides for generous maternity and paternity leave benefits, childcare subsidies and flexi-work arrangements.

Kim Leng Siaw, TMF Group’s Managing Director for Singapore, noted: “In Singapore, efforts to nurture a skilled workforce, provide sound education and support continuous upskilling have contributed to the nation’s status as a business epicentre in the heart of the region.”

Beyond these core requirements, employee entitlements vary significantly between jurisdictions and industries. In the US, for instance, a ‘13-month salary’ or bonus is commonplace. Shared parental leave is a legal requirement in 63% of jurisdictions, compared to 57% in EMEA and 33% in APAC.

APAC leads the way in pension provision: a fund must be offered in 79% of its jurisdictions, compared to 63% in the Americas and 50% in EMEA. Some jurisdictions demand relatively unusual benefits, including transportation allowance (16%) and life insurance (11%).

Benefits can vary across sectors. In Denmark, for example, benefits for different industries are agreed by representatives for workers, employers and the government and reviewed triennially. 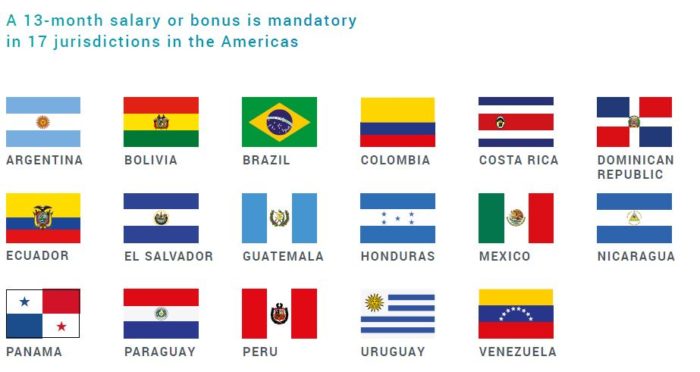 Globally, governments require companies to submit their payroll data at least once a month in 76% of jurisdictions. In France, where reporting requirements are particularly stringent, businesses must submit monthly reports detailing the pay and hours of individual employees, along with demographic data including the gender pay gap.

The introduction of electronic systems to automate and standardise reporting procedures can reduce this reporting burden. For example, the Brazilian government has introduced eSocial, a system that unifies the electronic submission of employer and employee data.

“Companies need the flexibility and agility to accommodate rapidly changing employment legislation for every territory they operate in – whether they employ thousands of workers or just one. Technology is essential but it is a tool – to ensure better outcomes, businesses need to know how to use it.”

Additionally, retrenchments were also lower compared to the preceding quarter and compared with a year ago...

After handing in their resignation, some workers believe they have nothing to do but wait for their last day in the office to come..

The secrets behind effective development

Joanna Yeo, head of human resources at Bayer Healthcare Asia Pacific, shares her personal insights on how to best develop and groo..

The top 5 job categories that are in demand in Malaysia