Linda Teo, country manager for ManpowerGroup Singapore, pointed out that at home, exports have shrunk, manufacturing activity has fallen, and small and medium-sized firms report little or negative growth.

She added: “China’s economy continues on a sluggish track, impacting our shipments there. To a certain extent, these factors contribute to the muted hiring sentiment for the next quarter.”

More than two-third of the 620 local employers surveyed anticipated no change in their headcount for Q1 2016, while 15% expect to increase staffing levels.

The most recruitment is anticipated in Singapore’s public administration and education sector, where the outlook stands at +21%.

Teo explained: “Private schools and public-sector agencies partly account for the ramp-up in hiring as they seek to grow or improve service levels.”

Next up was the finance, insurance and real estate sector, where the outlook is +16%, followed by a 13% outlook for both the mining and construction, and the transportation and utilities sectors.

Meanwhile, the weakest hiring prospects were in the wholesale and retail trade sector, with an outlook of just +5%. 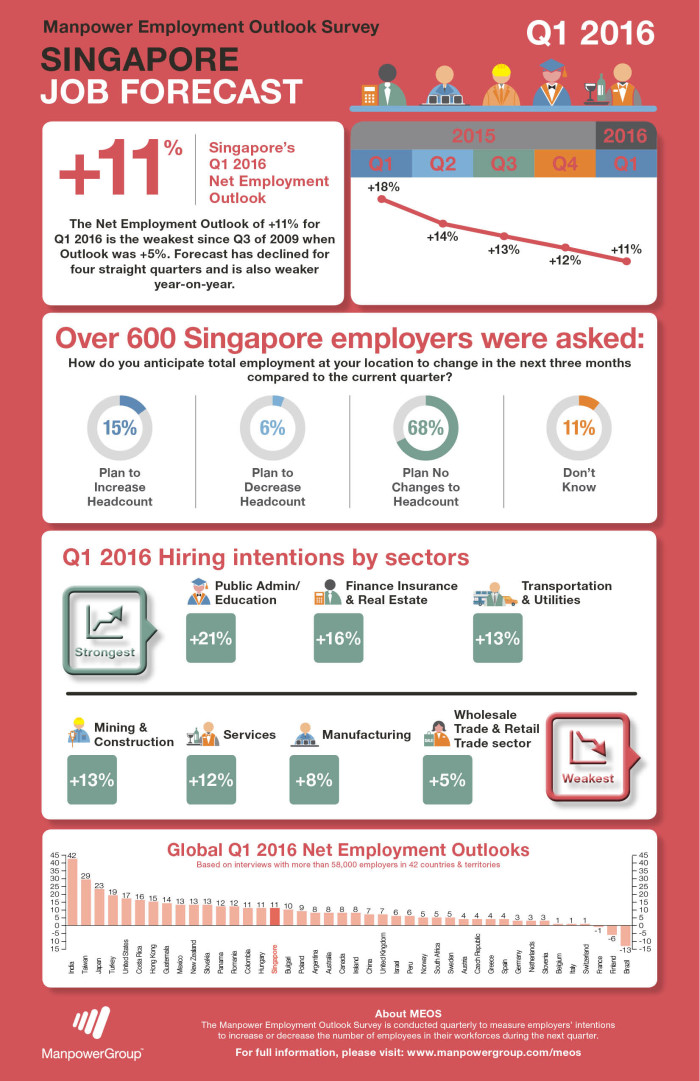 Among the eight APAC countries studied, the hiring outlook for Q1 2016 was strongest in India and Taiwan. Year-on-year hiring plans have also strengthened in Japan and Australia.

Similar to Singapore, employers in China, New Zealand and Taiwan report weaker hiring plans while the forecast is unchanged in Hong Kong.

Business leader Koji Yoshida on how his manager’s trust and encouragement 28 years ago has made a deep impact on his career with t..

More than 1,000 employers have been warned or fined over providing unacceptable living conditions for foreign workers. ..

A boom in housing supply to stimulate hiring plans in the mining and construction sector, while retailers anticipate a weak outloo..

Use social media and smartphone apps to attract jobseekers in Singapore

In Singapore, the top HR tech used by jobseekers are social media ads, smartphone apps, and texting with a company. ..