Are these the worst times in the day to conduct interviews?

Candidates might prefer for hiring managers to interview them after 5 p.m. – but is that time really the best for bosses to be conducting interviews?

Apparently not, according to new research by Accountemps, which surveyed more than 2,200 chief financial officers (CFOs) on the best and worst times for conducting interviews.

The study found only 2% of respondents chose 5 p.m. and beyond as the most productive time for meeting job candidates.

The period between 3-5 p.m. was also seen as unfavourable by those polled, with only 5% saying they view it as an optimal window to interview job seekers.

The best time identified for hiring managers to interview candidates was found to be between 9 to 11 a.m – as highlighted by 61% of respondents.

“Mid-morning is an ideal time for a job interview because it gives the interviewer time to set daily priorities and settle into his or her day before the meeting,” said Bill Driscoll, district president for Accountemps.

“Avoid scheduling an interview late in the afternoon when fatigue sets in. Late afternoon is also the time when interviewers may start shifting their focus to personal priorities.”

Here is the complete breakdown of the results: 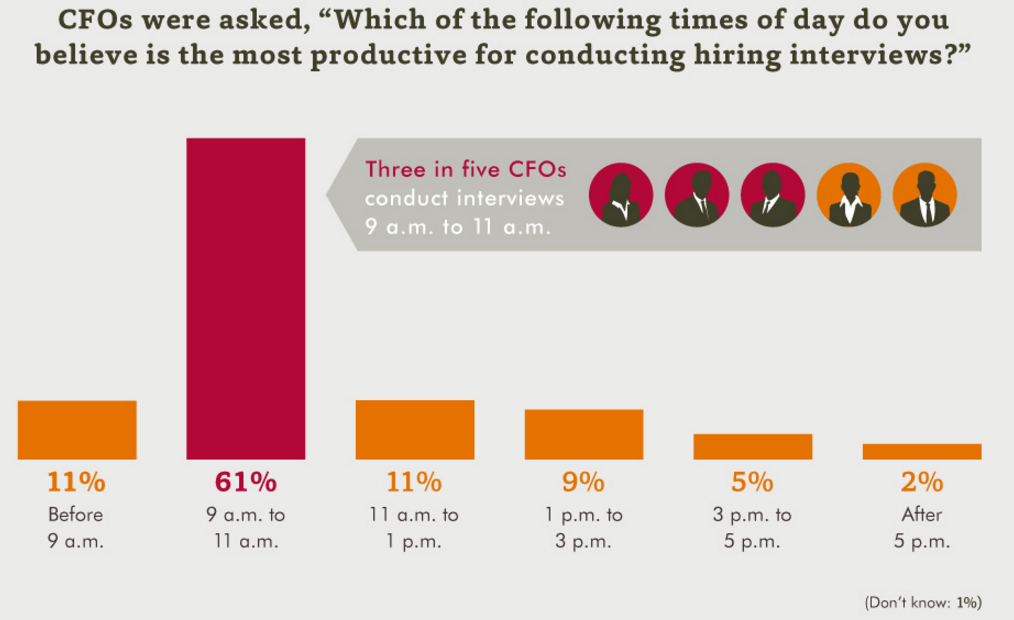 Speaking of timing, the research also found the first few minutes of a job interview can be the most telling.

More than half (60%) of CFOs said they form an opinion of the candidate within the first 15 minutes.

Hiring managers in Malaysia: What's the optimum number of interviews?

In a statement to Human Resources, a spokesperson said: "We are reorganising the business with a re-alignment of roles and functio..

A cup of soup is the preferred beverage for 48% of Chinese employees, while British staffers would rather have sodas or juices (42..

Why your organisation needs a strong travel culture

For one, it helps foster deeper relationships with customers and business partners, as well as between employees based in differen..

Some public servants face pay cuts of 30% when they are re-employed at age 62. Are they better off in the private sector?..

The most coveted employers for Singapore’s business graduates

Google has emerged as the most attractive employer for graduates, while Singapore Airlines and A*STAR feature prominently in the r..