Amid a tight labour market, employers in Singapore are facing increased difficulty in finding suitable applicants, according to ManpowerGroup’s talent shortage survey.

This was a “sharp climb” of 30% from last year – making it one of the “most notable increases” in the world.

“Close to two in three Asia-Pacific employers with a talent shortage problem say this is having a medium (40%) or high impact (23%) on their ability to meet client needs,” the report stated.

“Singapore employers are particularly concerned about this issue, with 52% saying talent shortages have a high impact on client relations.”

Worldwide, the percentage of employers who stated they are facing difficulties filling job vacancies also rose from 36% to 38%.

This was the highest figure reported since before the global economic recession started in 2008.

Japanese employers continued to face the most severe shortage, with 83% saying they encounter difficulties. 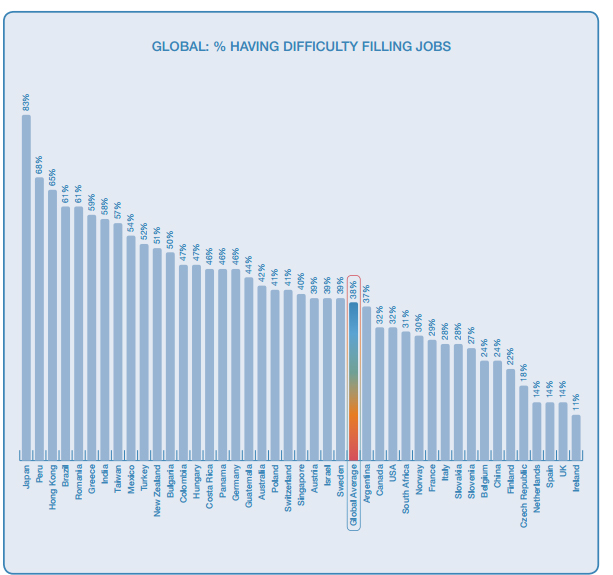 Within Asia Pacific, the current proportion who reported talent shortages stood at 48% and was the second highest since 2006.

Besides, Japan, lack of appropriately talented candidates was most likely to be a concern in Hong Kong (65%), India (58%) and Taiwan (57%).

The report found attributed this rise of talent shortages in the region to a lack of technical competencies in the labour pool – 35% of employers identified this as a reason underlying the difficulties they are facing.

This was followed by a general lack of applicants (31%), experience (18%), and unrealistically high pay expectations (14%).

Opinions were, however,  mixed among Asia Pacific employers when it came to how much difficulty they have to deal with when compared with 2014.

While hiring was most likely to be regarded as less difficult this year in Singapore (32%) and India (27%), 12% of employers in Asia Pacific admitted they are finding it harder to fill jobs and 55% reported the level of difficulty is unchanged.

An opportunity to be CEO for a day

Sales representatives are in acute shortage, but engineers and IT personnel are in high demand as well...

How differently do bosses and staff view company culture?

When asked to rate their company culture on 13 cultural norms, managers and staff disagreed on each and every one...

Why future HR leaders will be like data scientists

To thrive in the digital world, HR needs to elevate its analytical capability to create HR plans that are educated and fact-based...