The most and least productive sectors in Singapore

Good news for businesses in Singapore – the country’s overall labour productivity is on the rise.

According to the Economic Survey of Singapore Second Quarter 2016 released by the Ministry of Trade and Industry (MTI) today, Singapore’s overall labour productivity (measured by value added per worker) improved by 0.7% in Q2 2016 compared to the same period in 2015.

The sectors which registered the highest increase in productivity were:

On the flip side, the sectors with the greatest dips in productivity in Q2 2016 were:

“Compared to the same period last year, the productivity of outward-oriented sectors grew by 2.0% in the second quarter, while that of domestically-oriented sectors fell by 1.5%,” the report stated. 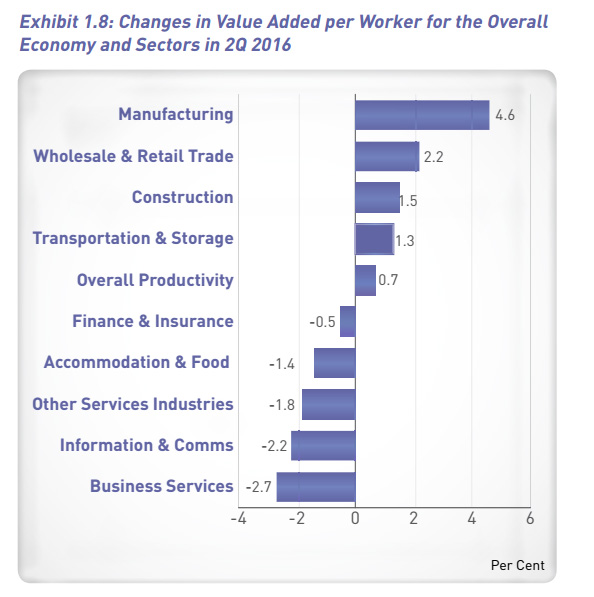 The report also found that the overall unit labour cost (ULC) for Singapore’s economy rose by 3.6% in Q2, faster than the 3.1% increase in Q1 2016. This increase was attributed to an increase in total labour cost per worker, which outpaced labour productivity gains.

By contrast, due to declines in labour productivity in both sectors, the ULC for the accommodation and food services and business services sectors rose by 6.3% and 7.5% respectively.

ALSO READ: Layoffs, unemployment on the rise in Singapore Q2 2016 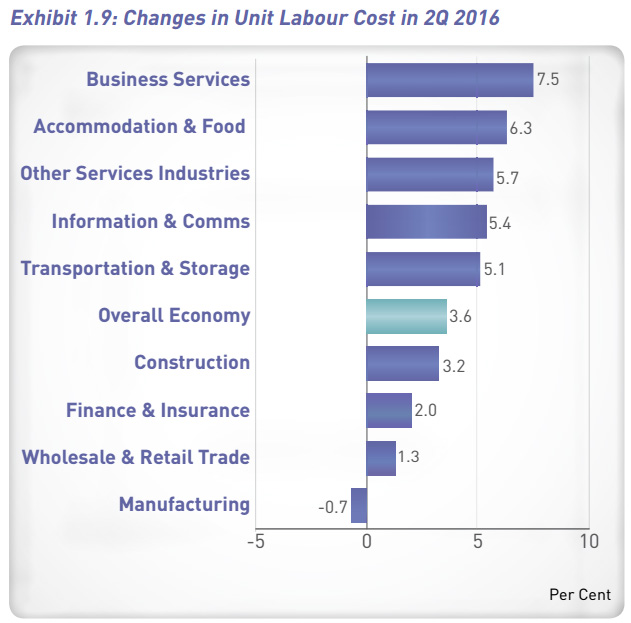 Additionally, it pointed out that on a quarter-on-quarter seasonally adjusted annualised basis, the Singapore economy grew by 0.3%, slightly faster than the 0.1% growth in the preceding quarter.

Sectors with the strongest growth includes the transportation and storage sector (2.9%), the wholesale and retail trade sector (2.2%), the other services sector (1.6%) and the accommodation and food services (1.6%) sector.

On the other hand, the business services sector recorded a slight contraction of 0.2%, weighed down primarily by the real estate segment. 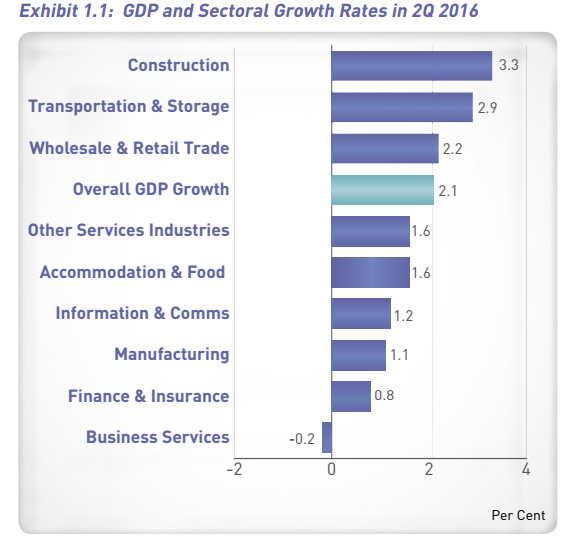 While the manufacturing sector grew by 1.1% in the second quarter – a reversal from the 0.5% decline in the previous quarter – the report found that due to the subdued external outlook for the sector, manufacturing firms remained cautious in their hiring plans with a net weighted balance of 12% of manufacturers expecting to hire fewer workers in the Q3 2016 as compared to the Q2.

The sector’s negative hiring expectations was primarily driven by the oil-related segments. In particular, in the marine and offshore engineering segment, a net weighted balance of 39% of firms expected lower levels of hiring.

On the back of weak trade flows and sluggish retail sales (excluding motor vehicles) respectively, other segments registering negative hiring expectations includes the transport and storage and retail trade industries with a net weighted balance of 6% of firms in each of these industries expected to reduce hiring in Q3.

By contrast, firms in the accommodation and real estate industries were the most optimistic, with a net weighted balance of 17% and 10% of firms in the respective industries expecting to increase hiring in Q3.

The services sector was also optimistic in their hiring outlook, with a net weighted balance of 3% of services firms expecting to increase hiring in Q3 2016. 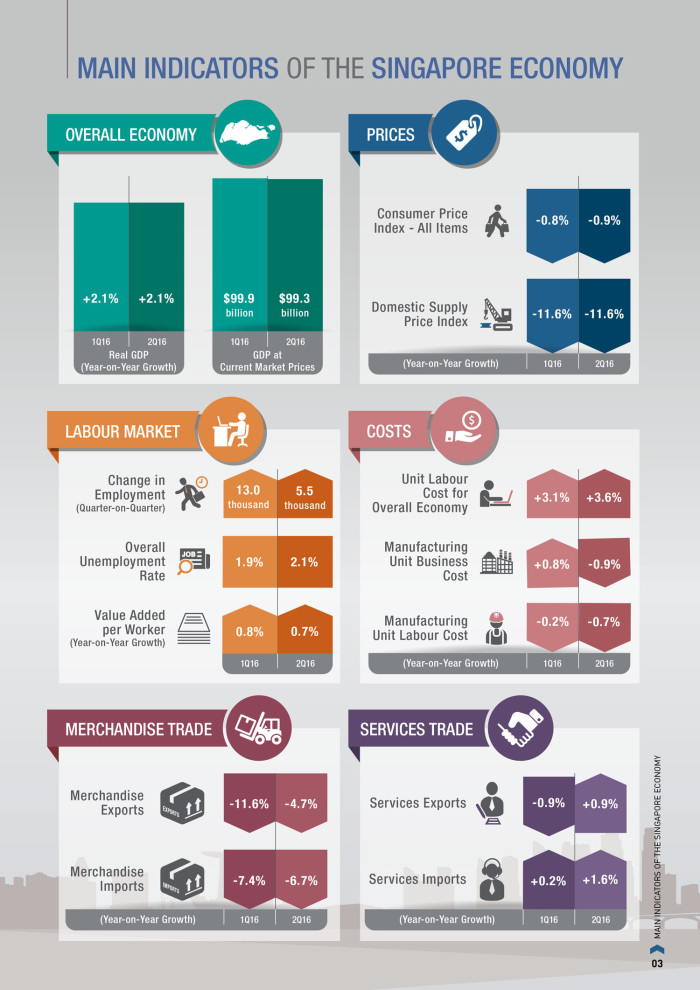 Pick up the phone to scout for passive candidates

With 80% of talent being passive job hunters today, what are the best ways firms can go about recruiting them? ..

Action for change: How leaders from BASF, Emirates, Henkel, and more are taking responsibility for D&I

One way to combat unconscious biases is to ask: "Am I saying or doing this because of who I think he or she is?"..

Tailoring benefits for a new generation

Find out how companies from various sectors can prepare for the future when planning their employee benefits...

Jobs ads for HR professionals in Singapore rise by 48%

The nation saw a 23% annual growth in job advertisements in 2014, driven by the introduction of the Fair Consideration Framework ...

Why your employees are walking out the door

Companies might want to start reassessing their talent priorities as 80% of professionals are leaving the company because of this ..